In his musical operatic tribute to the former first lady of the Philippines, David Byrne leans on pop psychology to tell the story of the “steel butterfly.” 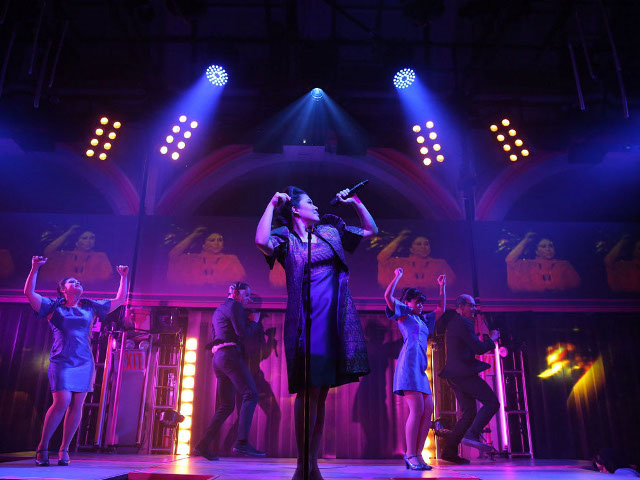 The musical “Here Lies Love,” with concept and lyrics by David Byrne and music by Byrne and Fatboy Slim, is open through July 28 at The Public Theater in New York.

In this regard, Imelda Romualdez Marcos need not worry. The ex-czarina of the Philippines has never been out of the spotlight, even after her less than glamorous exit from center stage. Still, the provincial lass-made-good lived very well in Honolulu, though perhaps not as luxuriously as when she and Ferdinand Marcos brought the country to ruin. When apparently unable to touch her bank accounts while being tried in a US federal court for alleged crimes committed while in office, she was bailed out, literally, by her glam friend Doris Duke—during the trial in which she was acquitted, on her birthday no less, she remarked that it was Ferdie up in heaven who made it all possible. Of course, I doubt it was from heaven that the dead tyrant pulled strings. Besides, it has always struck me as odd, the implication of that statement, that only a miracle would save her from federal prison, suggesting that if there had been no divine intervention she would have been found guilty.

David Byrne’s musical Here Lies Love, labeled a “poperetta,” would surely not surprise Imelda, did she care to notice that her life story has been reclaimed for the stage at the Public Theater, a theatrical mainstay of downtown Manhattan. Would the work please her? She would probably consider that question irrelevant, apropos of Wilde. Byrne has fashioned a piece of musical theater that attempts to depict a psychological portrait of La Imelda within the setting of a discotheque—his and Fatboy Slim’s music, lights, DJ, slide shows, the works—going by the much publicized fact of Imelda’s fancy for discoing.

He with some singers performed the music at a Carnegie Hall concert gig some years back, and was rightly criticized (by myself, among others) for overlooking the much darker side of the woman who would be queen. This time there is more of that side, while still hewing to the pop psychologizing of a poor girl’s need to satisfy her craving for acceptance and respectability by acquiring all the conventional tokens of a high-end lifestyle: jewels, artworks, real estate—not to mention shoes, of which there is blessedly no mention here. 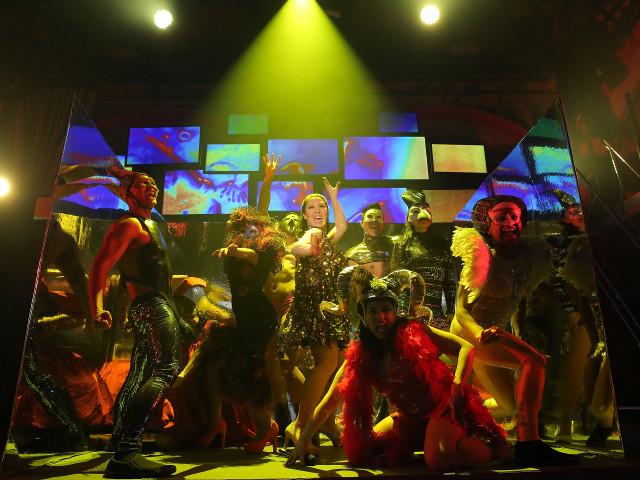 Here Lies Love has catchy, danceable tunes, and, as staged by Alex Timbers, motion, sound, images, and lights combine to not just evoke an era but also actually transform the theater into a disco. There are no seats, except for the upper boxes, so most of the audience becomes disco goers, standing and dancing beside movable platforms where different parts of the poperetta unfold. Ruthie Ann Miles and Jose Llana bring verve and magnetism to their roles as Imelda and Ferdinand, embodying the real-life duo’s view of themselves as the mythical Malakas (Strength) and Maganda (Beauty).

It is a thoroughly enjoyable spectacle. And yet, pop psychology is in the end unsatisfying, simply because it adheres to a rather simplistic intellectual frame. Yes, Imelda was driven by an unflagging insecurity about her humble origins, but one’s social genesis is not the only determinant of future behavior. Played with convincing grit by Melody Butiu, Estrella Cumpas—the loyal servant who took care of Imelda and her siblings when they were poor relations of the father’s first family—tells Imelda, in one of the sharper encounters, that there was nothing wrong with growing up poor.

Rather than point to that as a measure of her character, Imelda shied away from this inconvenient bit of reality and deliberately made moral and ethical decisions in her personal and political life (to her, they were inseparable) that stressed appearance above everything else. In Byrne’s telling, she causes the disappearance of Estrella and also warns Ninoy Aquino not to return once he leaves with his family for the United States.

The poperetta stresses Imelda’s penchant for culture and the arts. True enough, but nowhere is there a mention of the huge scandal due to the 1981 tragedy that befell workers rushing to complete the Film Palace, as part of the Cultural Center complex, with strict orders from Imelda that they were to do so 24/7 to ready it for her ill-advised Manila International Film Festival. The haste led to a top floor collapsing and burying those underneath it, in quick-drying cement. Attempts were made to suppress the deaths—after all, these bodies belonged to nobodies—but the event was too much of a tragedy to be kept from the news.

Political and social events are sketched that point the way to the 1986 People Power movement that forced the Marcoses to flee. Toward the conclusion, a member of the terrific ensemble starts playing on acoustic guitar songs whose lyrics are based on the actual words of those who had taken part in the 1986 uprising. He is joined shortly by two other drum-playing ensemble members. It is a beautiful, reflective scene, and I initially thought, what a great way to end the night, hearing from the too-often anonymous. I was mistaken, however, for the last number is reserved for Imelda and the ensemble, singing the lead song, ‘Here Lies Love.’

For a taste of the poperetta’s score, here’s ‘Why Don’t You Love Me’ from the 2010 concept album for Here Lies Love, with vocals by Tori Amos, as Estrella Cumpas, and Cyndi Lauper, as Imelda Marcos:

This review originally appeared in the Philippine Daily Inquirer. It has been reprinted here with the permission of the author.

Luis H. Francia is a poet, playwright, and nonfiction writer. Among his nonfiction works are the memoir Eye of the Fish: A Personal Archipelago, winner of both the 2002 PEN Open Book Award and the 2002 Asian American Writers Workshop Award, and A History of the Philippines: From Indios Bravos to Filipinos. He has taught writing workshops at the Iowa Writers Workshop, Yale University, City University of Hong Kong, and Ateneo de Manila University. An online columnist for the Philippine Daily Inquirer, he teaches Filipino language and culture at New York University’s Department of Social and Cultural Analysis.

The Ultimate Femme Fatale: Noir in Manila
Jessica Hagedorn writes about the city of her birth, where "either nothing surprises you, or everything does."

The Fiction of Our Experiences: An Interview with Mia Alvar
'Imagination can make things more real than they would be if they were just reported from real life'—the author of In the Country speaks on writing stories of south-south migration and when not to be faithful to a map.