The sunflowers fall, right along with their mason jar, in the middle of the night. Their heads too gloriously full of early July. How they seem to know everything, except the virus. 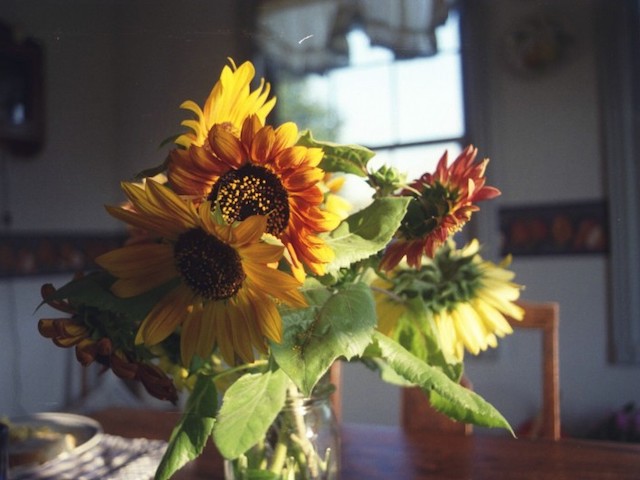 The sunflowers fall, right along with their mason jar, in the middle of the night. Their heads too gloriously full of early July. How they seem to know everything, except the virus. The crown it wears. All the unglory it craves. Receives.

At Williams Sonoma the other day, a sales associate named Carol welcomes the two of us to a new, touchless shopping experience. It’s a capacious Williams Sonoma, at the Natick Mall, and we’re impressed by how Carol’s voice fills the entire store. Her cheery script a lingering chime in our ears. We’re here after our usual supermarket trip, curious how the mall is reopening. And Carol—I know she’s paid to sound happy about this situation, as she’s paid to ooze happiness about every Le Creuset skillet, kettle, cassoulet. But she sounds far too happy.

Something wakes the dog. His barking like fistfuls of sunlight, like the sun set on fire. I sit up at once, see what he can’t: the sunflowers, the jar, on the carpet. You groan, slowly raise your right hand, the only part capable of any semblance of awake. You caress the dog’s head. His back.

You soften the fright away with syllable after syllable of your hand.

I wave to Carol as though sending her some love, though mostly it’s concern. She smiles and smiles, as though the smile has kidnapped her, as though her name isn’t actually Carol, as though Williams Sonoma has given her that name, taken all her vocabulary except smiling and “How may I assist you??”

I keep seeing it in slow motion, though I didn’t actually see their falling. The sunflowers, overcome with true dizzying delight—with themselves.

I miss seeing your delight when touching pots and pans and potato mashers, the vast array of Le Creuset. That afternoon with one autumnally orange Dutch oven. Your face, as you touched that fire. Your face whenever you just have to touch the fabric of every shirt that catches your eye in H&M, tell me exactly how it feels. Then ask me to touch it, describe it myself. So soft, yes, but in what way? Like a cloud? About to burst?

I picture Carol with sunflowers.

In a Williams Sonoma-approved apartment, Carol is allowed one sunflower, one real happiness she can put in her own jar.

Your hand doesn’t touch even the shirts now, though you read somewhere fabrics are okay, the virus can’t live on them, or not for long, or what are the facts, today?

Or perhaps Carol, when she’s not a grinning retail robot, is the patron saint of sunflowers.

I miss museums. Walking around with you, coming across an exhibit that exclaims, Touch me! Watching your fingers revel in being fingers on a wacky new surface.

Then kissing you hard while that twelve-foot tall papier-mâché duck watches, jealous.

Let there be a patron saint of making impossible birds very annoyed.

July 7, 2020: Over three million confirmed cases in the US. Over fifteen thousand in critical condition. Over one hundred and thirty-three thousand dead. Over half a million dead globally.

Many of the things I miss are pretty silly. Pretty and silly. And I miss them deeply.

And my mother, who lives only ten minutes away by car, but hasn’t left the house in months, has insisted I not leave mine unless absolutely necessary. My mother, already sick, chronically sick in three different ways. She says not to send anything. How I want to send her all the sunflowers.

Carol, you may assist me now. If you are indeed the holy rep of sunflowers, Carol—please make row after row flicker up in the night, in the worry-field of my mother’s head. Help her sleep. And dream only of glowing, petal-soft things.

Surely, there is a patron saint of touch, who yes, at the moment is struggling—unlike the brand-new patron saint of branded touchless experiences, whose business has only been expanding. Booming, like a dog’s 3 a.m. holler.

I miss walking through a museum by myself. That sweet surrounded-by-art aloneness. Solitude enhanced, perfected—by unwearable pantsuits, hairy suitcases.

I think it’s what any artist hopes for: not only to be remembered, but to be company.

Perhaps Carol really is overcome with joy. Thrilled, like us, to be out of the apartment, away from her relentlessly beautiful dog, cat, kid. Even when it means repeating the same couple of lines, a sort of depressing jingle. And the mask—all day. Still, she’s out and she’s caroling about the latest sale on summer grilling essentials. To people who—perhaps she’s glad for it—don’t know her.

“They fell?” you ask in the morning, surprised to see the sunflowers strewn on the carpet. “Yes,” I say, and explain how that led to the dog barking. I add something about being too tired to pick them up, but really, I liked the way they looked on the carpet, like golden messages from some other, less exhausting place.

You pick the sunflowers up, return them to their jar after refilling it with fresh tap water. You climb back in bed and touch my face.

You climb back in bed to touch my face.

You wrap your arms around me and it’s like you’re the patron saint of touch as well as soft sunlight and soothed dogs. Or you must be the earthly representative of divine holding. Or you’re both and also a boy, like me, holding on.

Chen Chen ’s second book of poetry, Your Emergency Contact Has Experienced an Emergency, is forthcoming from BOA Editions and Bloodaxe Books (UK) in September 2022. His debut, When I Grow Up I Want to Be a List of Further Possibilities, was longlisted for the 2017 National Book Award for Poetry, among other honors. He has received two Pushcart Prizes and fellowships from Kundiman and the National Endowment for the Arts. He teaches at Brandeis University. “Summer” is his first fiction publication. 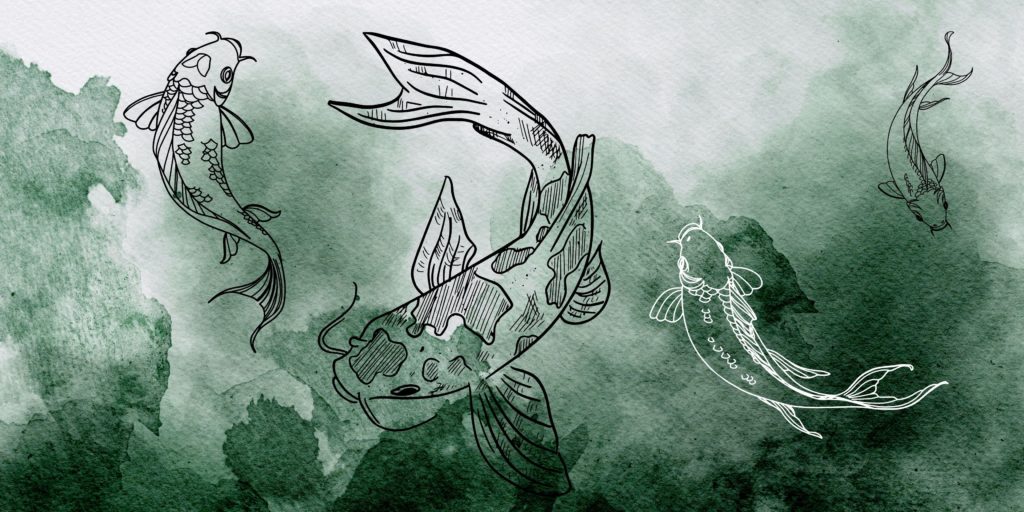