The Aerogrammes author chats about her preferred superpower and her love of Norton Anthologies. 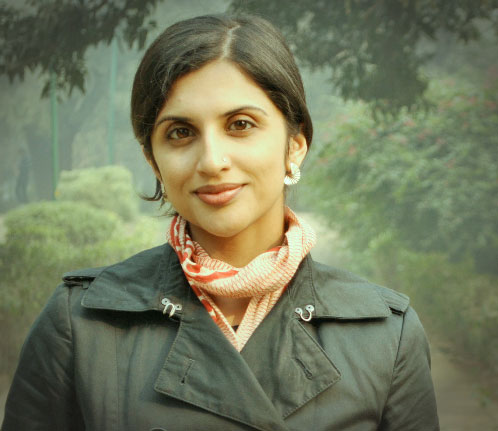 Tania James is the author of the novel Atlas of Unknowns and the short story collection Aerogrammes, the title story of which was a finalist for Best American Short Stories 2008 and a Pushcart Prize nominee. The San Francisco Chronicle called James’s novel, “Dazzling… one of the most exciting debut novels since Zadie Smith’s White Teeth.” She grew up in Kentucky, before earning a film degree from Harvard University and an MFA from Columbia’s School of the Arts. Her works have been featured in journals like Boston Review, Granta, Kenyon Review, The Onion, and The New York Times. A Fulbright fellow in New Delhi, India, she currently lives in Washington, DC.
What are some of your favorite movies?

The Bicycle Thief is one of my favorite films. It’s one of the films I saw in undergrad, and it was unlike anything I’d ever seen. It was using real people sort of in the Italian neo-realist style. And also, Sherman’s March, which is a documentary by Ross McElwee, a personal documentary which clearly has influenced me and which appears in my book.

Can you tell me about an embarrassing moment during a talk?

Yes, I can. An embarrassing moment would be my first reading in New York. It was my launch reading. Somehow, I got lost on the way and I was running, and I got there and sat down and immediately started reading. There was a microphone, and probably 10 seconds into the reading, I realized I had to blow my nose. But I’d never seen an author stop a reading to blow their nose or to ask for a Kleenex, so I kept reading, but most of the reading, which is recorded on a podcast somewhere, is me [sniffs], you know, trying to hold everything together and growing parched. So I’ve learned now. My publicist always kind of checks with me now—“Are you sure you’ve got your Kleenex? You’ve got your water? Get there ten minutes early.” So that was my most embarrassing moment, but I’ve moved past it.

What is your favorite Asian food item?

Well that’s a big—hm, I should know that. I like anything that is wrapped in a dumpling manner. I don’t include samosas; I don’t like samosas. But I like any kind of steamed dumpling.

If you were trapped on an island and you only had one book, what would it be?

I kind of think I would maybe take my high school Norton Anthology. I thought the anthology was great and we only always got to five percent of it, but there were stories about Woody Allen—I mean it just covered a range. There were always gems in there I never got to, so I think that would be a good book.

Do you have a genre that is your guilty pleasure?

Hm, romance. I don’t know. A genre? I don’t have a guilty pleasure because I feel that science fiction is a big pleasure. The first stories I was reading when I was in middle school were science fiction anthologies that my father happened to have. I loved Ray Bradbury, I loved, also, horror with Stephen King—some of his stories I really loved.

If you had any superpower, what would it be?

If I could have a superpower. . . Okay, if someone walks in, this is my one question! I guess I never wanted to know what other people were thinking, but I always wanted the power to know what the right thing is to say in any given moment—which I guess would help me in this interview a lot.

Tania James will be reading at the AAWW on Thursday, June 21, 2012, with Man Asia finalist Xu Xi and short story writer Raj Parameswaran, for The Misadventures of Anti-Heroes.