I should have studied their faces as they said goodbye, the way they smelled, the lines on their hands. 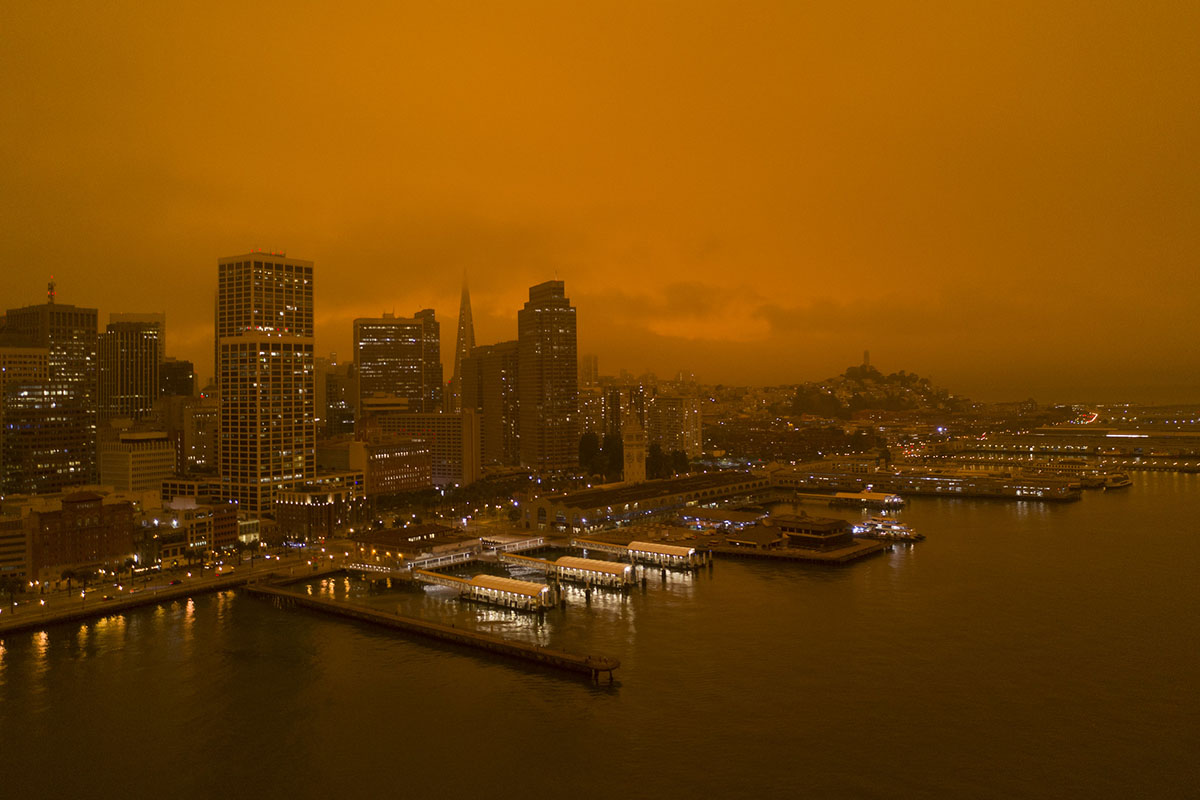 I shouldn’t even be outside, with the air quality index still over 170. Everything whispers that fact back at me—the sidewalks abandoned and the air hazy, light from the street lamps diffusing across suspended particles of smoke. There’s a melancholy in all the grays and pastels, the softened scenes, like a Tarkovsky film, maybe. I don’t know, I didn’t study film. Back in undergrad, I started reading this book called Color and Light by James Gurney. I might’ve seen things more clearly then, been better at describing the way scattered protons can shade spaces and surfaces—but I never finished the book. I didn’t study illustration.

It’s San Francisco, around 8 PM. I don’t know the chemical formula for alcohol, but I’m walking down a street near my apartment, lined with these red flowering trees, gum or eucalyptus, I think. If it’s eucalyptus, I don’t know if it’s related to the stuff koalas eat.

Chemistry, botany, zoology—all unstudied. My breath in the N95 smells like shit, and everything is coated in a thin layer of pale ash. If I’d had more booze back at my apartment, I would’ve stayed in, but it’s dangerous to keep too much of it there. Too easy for it to disappear and for a whole day to wind up soaked in it.

My grandparents died recently. The two I knew of who were still alive, at least. Both of them in Korea, an ocean, a pandemic away. I got the Google hangout messages from my father. The circle next to his picture was a flat, A/B-tested green. Last time I saw my grandparents, we’d all huddled around a white plastic table, and I had listened without understanding anything.

I know some immigrants like to talk about how much their family suffered for them, the hardships their ancestors endured so they could live a better life. Like all of that hardship was in a consent agreement with higher forces, a mortgage for progenital success. I am not a lawyer. It all feels a bit narcissistic to me, but I didn’t study psychology after all.

The neon in the corner-store window glows, and pinks and blues scatter into the night; they fade into the gray. The effect is striking, but it’s telling me the store is closed. I can feel the ash in my throat now as I start walking back. When I get in, my clothes smell like a campfire, like I’ve just been out for Korean barbeque.

I just don’t think my ancestors suffered so I could spend ten hours a day shifting pixels around to raise ad revenue for a corporation complicit in genocide. So I could forget their names, miss their funerals, never hold jesa. I’ll never know what they went through, but it probably wasn’t so their posterity could drop psychedelics and try twice a year to kick a drinking habit.

Two days ago I awoke to a stained, sepia sky and the only thing I could think of was that it looked like Blade Runner 2049. I don’t think they suffered for that.

Jefferson Lee grew up in Canandaigua, NY. He studied computer science and mathematics at Harvard University, and reviews books for Vagabond City. He has published writing in the Rumpus, Maudlin House, and PEP HAUS. He lives in San Francisco. Twitter: jlee4219