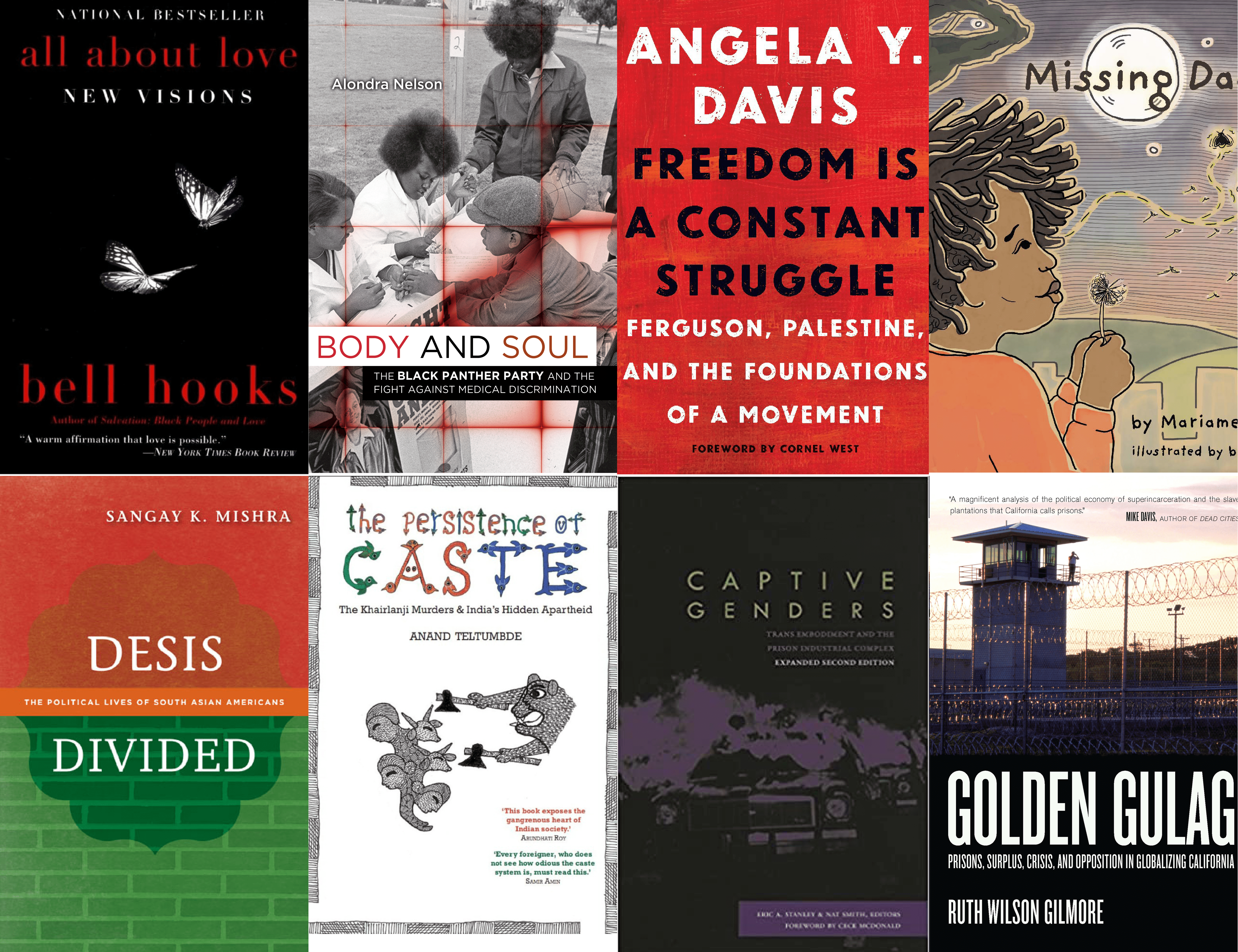 Our ideas and visions for alternative futures emerge through ongoing processes of learning, discussion, and practice. Fred Moten highlights how study is a political activity, a practice of studying together outside of or in spite of institutions and a refusal of a “call to order.” Abolitionist Stevie Wilson has spoken about the importance of study, describing study as central to prison disorganizing. Writers and organizers from our A World Without Cages project share the books they have shaped their imaginations, deepened their analysis of carceral systems, and inspired them to build different possible worlds.

author of “Abolition is Not a One Time Event: Prison Doulas as Catalysts”

This was one of the first Black feminist texts I ever read, and it absolutely changed my life at a time when I needed it most. I return to this book often and read it at least once every year. It continues to bring me profound new experiences, insights, and meanings, wherever I am, and whatever I or my community, my family, my kindred, is/are going through. It encourages me to love again, and again, and again. hooks powerfully articulates love as an element, an ethic, and a radical practice that must exist at the core of any abolitionist framework. hooks proposes love as something that is not conditional, nor unconditional, but deeply transformative if we truly allow it to be. It requires us to relinquish control of each other and of ourselves: to free each other through love. To love is to disavow the social conditioning that our oppressors have taught us to perpetuate against each other. To love is to constantly and consciously commit and recommit to our collective liberation. As hooks names, “Love as the practice of freedom.”

Body and Soul: The Black Panther Party and the Fight Against Medical Discrimination by Alondra Nelson (2011)

This book exemplifies of Black Liberation as collective liberation. Nelson shows us the history of how the Black Panther Party founded what has now become the (common/co-opted) discourse of “healthcare for all” in the U.S. Body and Soul provides a deeper dive and chronology of the Panthers’ community service and accountability efforts, specifically their free health clinics and programs that addressed anti-Black racism and medical violence, which still exists in health care. The legacies they left behind through the clinics they formed still exist today, even though the nation’s collective amnesia and criminalization of the Black Panther Party has remained. This book is a blueprint that should be used to continue the legacy of what they created and shows us what is possible through collective “community care [that] requires societal transformation.”

author of “Where No One Suffers Hungry”

Golden Gulag by scholar and abolitionist Ruth Wilson Gilmore should be required reading for any resident of California. Wilson explains the origins of the state prison system and the 500% boom in the incarcerated population between 1982 and 2000.  In the introduction, she writes “While common sense suggests a natural connection between ‘crime’ and ‘prison’, what counts as a crime in fact changes, and what happens to people convicted of crimes does not, in all times and places, result in prison sentences.” This particular line stuck with me as I learn to understand how we are all capable of harm, but only some of us are deemed criminal, oftentimes determined by white supremacist logic. Wilson’s research is expansive and implicates all of us in upholding carceral logic and systems. She reveals that California’s financial wealth is tied to prison labor, aided by the intentional fracturing of communities. I can’t imagine finishing this book, left to reflect on what harm we’ve intentionally or intentionally enacted, and not immediately be moved to action. We are all responsible for these cages, so we all better tear them down.

Freedom is a Constant Struggle by Angela Y. Davis (2015)

The title of the book is drawn from a freedom song from the southern United States, with the refrain “we must be free, we must be free.” In this collection of speeches, interviews, and an essay, Davis centers the importance of Black feminism and Black radical traditions, along with stories from around the world to show how struggles against state violence and oppression are connected from Ferguson to Palestine, from South Africa to Turkey. Davis highlights how in 2014, Palestinians tweeted advice to the protestors in Ferguson after recognizing the stamp on tear-gas canisters, produced by a US company called Combined Systems, Incorporated—an example of “horizontal continuities” of both oppression and resistance. She also shares how the global security company G4S, the third largest corporation in the world, profits from the Israeli occupation of Palestine; caging and transporting undocumented immigrants; and providing weapons to armies as well as running centers for abused women and “at risk” girls. G4S uniforms are often seen in the streets of Kathmandu as well. The book ends on an optimistic note that “increasingly, young activists are learning to acknowledge the intersections.”

I came across this book at the moment when I was feeling frustrated with the pervasiveness of American exceptionalism, including in left movement spaces. Of course, the book does not cover all the geographies and issues I support or I am learning about. No one book or an individual can do that, definitely not in a meaningful way. What this book does give me is a lens and a roadmap, a transnational framework of understanding the “spatial and temporal connections” of struggles to build transnational solidarities. I have carried this slim volume with me from New York to Kathmandu, back and forth multiple times, flipping through it whenever I need words of inspiration.

author of “When I am Warm I am Safe”

Mariame Kaba has been monumental in my abolitionist learning and becoming.  It all started with this beautifully illustrated picture book about a young girl who misses her dad in prison. I first came across this when I was doing research for my senior thesis (a short film lightly informed by personal memories of my dad’s incarceration), and I was so overjoyed to discover that there now exists such a resource for children with incarcerated loved ones. There were no resources available to me when I was younger, so reading it when I did felt like someone was, at last, consoling my inner child.

“Abolition is not some distant future but something we create in every moment when we say no to the traps of empire and say yes to the nourishing possibilities dreamed of and practiced by our ancestors and friends… abolition is about breaking down things that oppress and building up things that nourish. Abolition is the practice of transformation in the here and now and the ever after.” This is an incredible collection of writing from people on the inside, with a focus on the experiences of incarcerated trans, queer, and gender non-conforming people. When I first learned of abolition, I was skeptical—I didn’t know how to imagine safety without the carceral state. I thought abolition was some far-off fantasy idea, but reading and re-reading this really grounded me in abolitionist ways of thinking and being. Abolition must be possible because it is the only avenue of liberation from state-sanctioned violence; there can be no compromise for freedom and liberation. These writings show how abolition is so intimately linked to queer liberation and the destruction of all systems of oppression, and I am reminded that a better world can and must exist!

This book is a great survey of South Asians in the US diaspora for someone looking for a starter bit of reading. Sangay Mishra traces the history of South Asian immigration from its fraught beginnings to its imminent realizations, including histories that are sometimes deliberately erased or forgotten. Specifically, his analysis is great for someone looking for an introduction to South Asian American political participation within the US, beginning with the journey to the US, the formation of a South Asian identity associated with the regionality of Silicon Valley, the post 9-11 resistance — particularly among South Asian Muslims – and the ongoing advent of diasporic nationalism. In particular, Sangay casts his eye on South Asian communities as historically and inherently “divided” by caste, religion, class, ethnicity, race, gender, and more. I would say that this book should be supplemented by critical writing on race, gender,  and caste by Dalit, adivasi, Muslim, and women South Asian writers. This is because the broad strokes documentation of South Asian political participation in the U.S., as in the case of Mishra’s book, often leaves out the details of how communal divisions among South Asians reflect erasures.

The Persistence of Caste: The Khairlanji Murders and India’s Hidden Apartheid by Anand Teltumbde (2010)

Excerpted from Mon’s piece here: “Abolition in the US is contingent on liberation everywhere. South Asian abolitionists from all backgrounds, but especially those who are North Indian, dominant caste, cis or straight, need to recognize the interdependency of these struggles and look beyond the U.S., beyond India, where these battles against caste, religious, and racial violence are being waged.”

Rachel Kuo is the guest editor of A World Without Cages. She also writes about technology and social movements. You can find her on Twitter @rachelkuo.

The Authentic Outsider
Bill Cheng, Anthony Marra, and the freedom to write what you don't know.