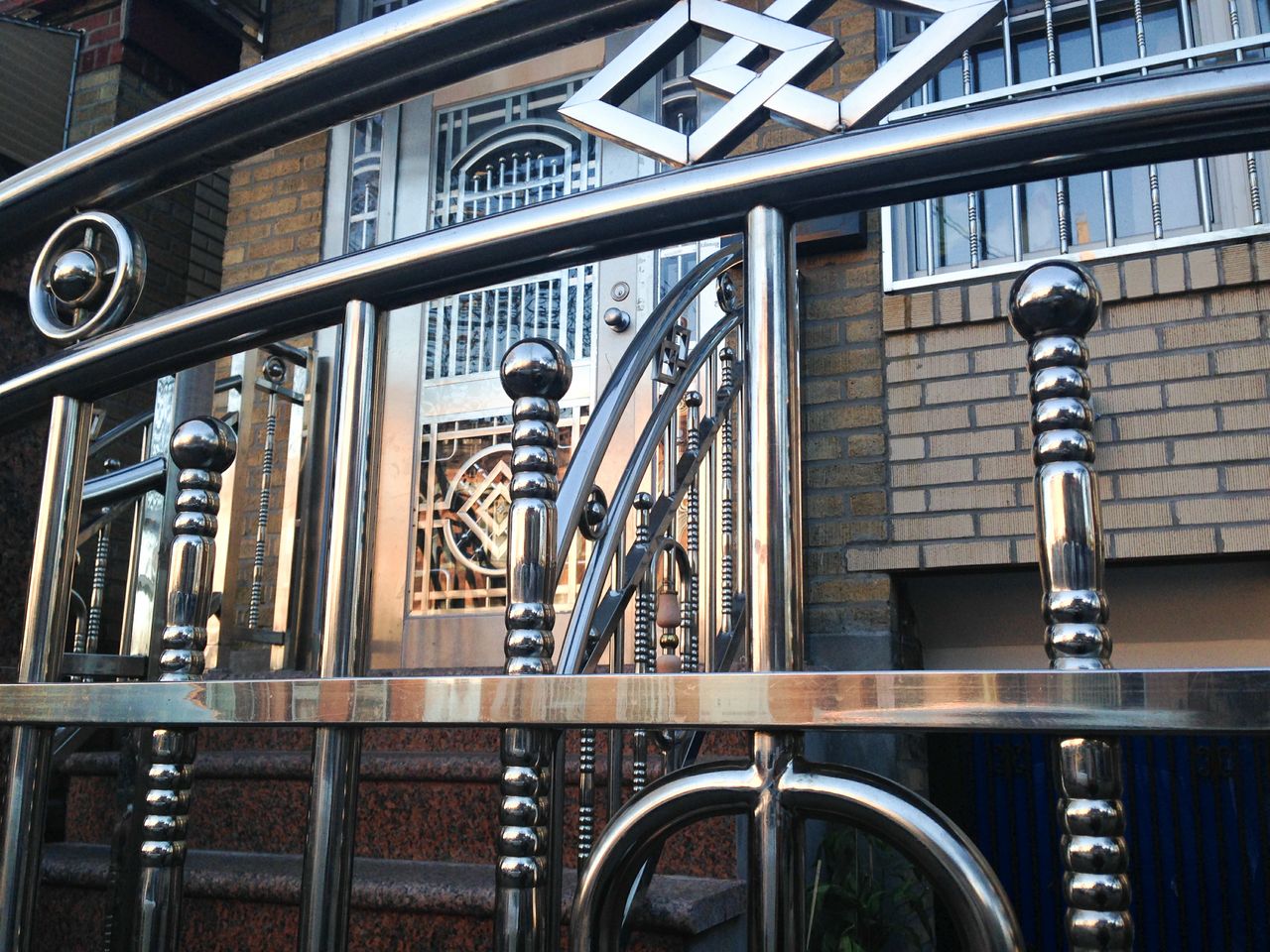 On a dreary day in early January, Shelly Gao, co-owner of Tony’s Iron Work in Sunset Park, was driving me around the neighborhood in her late model Mercedes SUV. We were on a tour of the homes in the neighborhood, with a particular focus on Gao’s area of expertise, which is all things metal and decorative.

Turning onto 51st Street, she slowed down. “We did that house,” Gao, who owns the store with her husband, said. There was a hint of pride in her voice as she pointed to a row house decked out in so much stainless steel, it felt more like an homage to the chrome-like metal than a mere decorative choice. The gate, the window guards (all seven of them), the railings leading up to the door, the door itself — all bright stainless steel, and sparkling even on a cloudy day.

“I see the design and I know. Only we have that style,” she explained of the door, which looks half Art Deco, half traditional Chinese. “It’s very special.” The cost, she estimated, was about $1500.

Stainless steel (a mix of steel and chromium, which is what gives the metal its shine) is increasingly popular in Sunset Park, Gao said.

This becomes apparent once you’re in the neighborhood — in parts of Sunset Park, especially east of 6th Avenue, it’s approaching ubiquitousness. Everything from handrails to gates to window bars to doors are made of the stuff, with details ranging from mundane geometric designs to delicate curlicues all the way to elaborate prancing lions. It’s particularly noticeable on certain blocks — there’s one stretch of 51st Street with 16 houses that sport one or two (or more) architectural details made of the gleaming metal.

According to Edgar Cordova, the proprietor of a Century 21 real estate office on 8th Avenue, this style is the unique contribution of Chinese immigrants who’ve bought and renovated homes in the neighborhood in increasing numbers during the past two decades. He estimates that 98 percent of the buyers that he’s worked with in the eight years since he set up shop are Chinese immigrant families.

Stainless steel is so popular among homeowners in this neighborhood that it’s become a kind of de facto ethnic predictor — see a facade clad in the metal or a stainless steel door, and you can assume the inhabitants are Chinese.

Stainless steel is so popular among homeowners in this neighborhood that it’s become a kind of de facto ethnic predictor — see a facade clad in the metal or a stainless steel door, and you can assume the inhabitants are Chinese.

All of this change hasn’t gone unnoticed by long-time residents. It’s a hot topic with the Sunset Park Landmarks Committee (SPLC), which has spent almost two years campaigning for parts of Sunset Park to be turned into a historic district.

While the main goal of the SPLC is to limit out of context development and the wholesale destruction of entire buildings, SPLC spokeswoman Lynn Tondrick acknowledged that stainless steel is “a different aesthetic” from the traditional iron.

“It’s sad. We’re losing the craftsmanship that happened at the turn of the century that we cannot replace,” said Tondrick of the neighborhood’s low-rise brownstones and row houses. “We’re looking to hang on to that.”

If the group is successful, homeowners would be required to obtain approval from the City’s Landmarks Preservation Commission before making any alterations — including installing new details like stainless steel. On March 19th, Sunset Park’s Community Board 7 will vote on whether to endorse the landmarking process.

Shelly Gao had a slightly different take on this aesthetic divide, which she offered up as we continued to tour the neighborhood’s various palaces of stainless steel.

“It’s sad. We’re losing the craftsmanship that happened at the turn of the century that we cannot replace,” said Tondrick of the neighborhood’s low-rise brownstones and row houses. “We’re looking to hang on to that.”

Driving down 8th Avenue, she continued to expound on the history of stainless steel in Sunset Park. “In the past, it was all iron,” she noted of her customers’ preferences, her immaculately French manicured nails tapping rhythmically on the steering wheel as she spoke. “Stainless steel has only been popular for the last seven, eight years.”

We continued to drive down more streets, slowing down every time she saw a home they had remodeled. “That’s ours,” she said of a silvery door etched with a delicate flower on the bottom – a seemingly popular choice, as several houses had the same design. “We did that one, too,” she said a few houses later. This continued, to the point where it seemed that she and her husband were responsible for almost all of the stainless steel covering the neighborhood.

The tour ended in the cramped office at the front of her shop on 39th Street that doubles as a showroom. As she entered, Gao pointed to a wall dominated by a dazzling array of decorative accents, including a couple of sinuous metallic dragons – “a very popular choice lately,” she noted.

She offered other, more prosaic reasons why immigrant residents might prefer steel over other materials. “Stainless steel doesn’t require as much maintenance and painting as iron, it won’t rust,” she said. Going to her desk behind the counter, she pulled out a thick photo album stuffed with photos of homes they had worked on and flipped through it until she landed on one featuring a “before” photo of an old iron gate with the paint peeling off. “You see how it’s rusted?” she said. “That wouldn’t happen to stainless steel. All you have to do is wipe it every now and then.”

Jennifer Ibrahim, one of Gao’s employees, was also sitting behind the counter. She chimed in with a different perspective: “It’s more modern. Iron’s more old-fashioned,” Ibrahim said.

“It’s their best choice,” Shelly added. “It’s not too cheap, not too expensive. Who knows, part of it’s also probably, ‘Oh I see other people have it, I want to as well”— a kind of immigrant version of keeping up with the Joneses (keeping up with the Zhangs, perhaps).

Michael Limaco, an architect based in New York and born in the Philippines, shared a different perspective, both as someone who’s heavily enmeshed in the world of building design and aesthetics, and as an immigrant himself.

Part of the preference for stainless steel may also be familiarity, he noted, explaining that metal is a much more common building material in Asia than in the US. Shelly, too, had hinted at this earlier when she mentioned that all of the stainless steel they use is imported from China.

“I think when you’re an immigrant, you want to bring things from home that you’re familiar with,” Michael explained, pointing to the popularity of stainless steel in cities like Hong Kong. “They bring those elements that they’re used to from their country, and they add that layer to the urban fabric. I think that’s really what it is.”

To Shelly, Chinese immigrants’ preference for stainless steel is both a practical and an aesthetic choice; for her employee Jennifer, it seems to reflect a desire for the modern, the fresh, and the new; and according to the architect Michael, it’s a style that’s brought over from immigrants’ home countries.

“I think when you’re an immigrant, you want to bring things from home that you’re familiar with,” Michael explained, pointing to the popularity of stainless steel in cities like Hong Kong.”

For some residents of Sunset Park, however, the only thing stainless steel represents is an eyesore.

Merlyn Comas, who’s lived in a brownstone on 52nd Street for decades, is one of its detractors. “I don’t like it. They’re changing the appearance of the neighborhood,” she said of the stainless steel doors and railings and the Chinese residents who are installing them. “I like change,” she went on, “but not when it deals with history. There are areas that could use all this modernization. But these houses, they were fine.”

The aforementioned Sunset Park Landmarks Committee seems to agree with Comas. Of the examples on its website of “historically inappropriate alterations,” several of them are new buildings complete with stainless steel balconies and railings.

Internet commentators on websites like the Brownstoner are considerably more biting, with users’ critiques of stainless steel ranging from calling it “tacky” to “Third World.”

Limaco, the architect, believes this negative sentiment “is a cultural judgment of wherever these immigrants are coming from,” and stems from a low-grade unease that the neighborhood is, as he put it, “becoming too Asian.”

Internet commentators on websites like the Brownstoner are considerably more biting, with the critiques of stainless steel ranging from calling it “tacky” to “Third World.”

“In Asia, people don’t really care about historic preservation. Everything has to be new and modern. And they bring what they think is modern with them, and it clashes,” he said. “Is it bad?” he asked (with air quotes around “bad” heavily implied). “Which one is bad? Whose values are more important?”

That’s at least one of the questions that the SPLC and Community Board 7 will grapple with on March 19th, when the board votes on whether to support land marking the neighborhood. Given the support for the historic district — Lynn Tondrick said that more than 400 homeowners are in favor, in addition to organizations like the Chinese-American Planning Council — it’s likely the board will endorse the process.

But for the time being, it seems that stainless steel will continue to proliferate on the homes and streets of Sunset Park. On two recent Sundays at Tony’s Iron Work, workers were busy soldering and working on stainless steel finishes, and Shelly, when asked how many houses they renovate per year, replied, “Too many to remember.”

Mr. He, a Chinese homeowner in Sunset Park, explained why he and so many other immigrants seem to love the look of stainless steel (he declined to give his first name).

“The old style, it’s not that special. This kind of stainless steel, it’s a new style,” Mr. He said while standing on the sidewalk in front of the two-story row house he owns on 41st Street. “If you want to fix a house up, you want to choose new things. Old things, you want to phase out.”

He pointed to the home next to his, done in wrought iron, and scoffed. “If you don’t paint it, it’ll rust, like this one. It doesn’t look good.”

The house he owns, which he currently rents out, has a simple wooden door that he plans on switching out. “In the future, I’d like to install a stainless steel gate,” he said. “If I fix it up in the future, I’m definitely going to use the stainless steel. We want it to look nice. If it looks old, no one will want to live there.”

And, Mr. He added, pointing to another more economic reason: “With the new look, you could probably raise the rent.”