‘Here in New York, however, the boat had a different meaning: a migrant who, despite all the baggage he must carry, is still afloat.’ 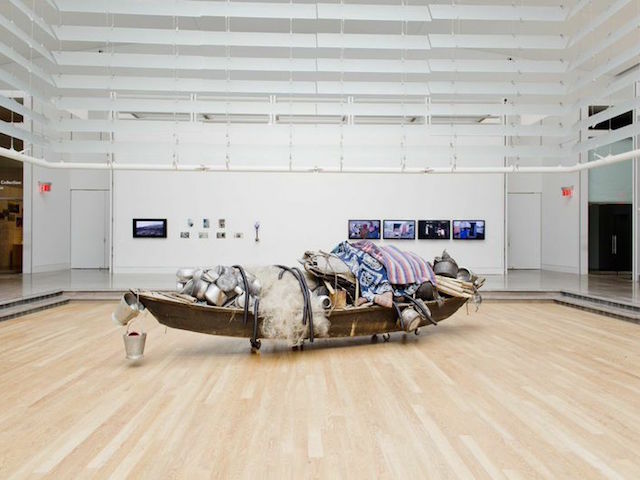 The following piece by Amitava Kumar was written in response to Subodh Gupta’s multi-media sculpture “What does the room encompass that is not in the city?”

At the Queens Museum

Afterwards, they were to go for drinks.

The exhibition was at the Queens Museum. They had kissed once, some weeks ago, after a screening of Apur Sansar at the Film Forum, but then Piya had left for D.C. to intern at NPR. Piya’s father owned a jewelry shop in Hawthorne, NY. She had been born in a hospital in Westchester County. Aamir was from Allahabad, his parents were both professors there, in sociology or psychology, Piya wasn’t sure now.

But where would they find a bar here? They sat down with bottles of cane cola in the museum café. The café had glass walls. In front of them, they could see giant fountains around the Unisphere, tall jets of water rising twenty feet high, the spray drifting in the warm air while planes crossed the sky from left to right.

Piya said, What is one work of art that has touched you the most?

An art work, Aamir said. Anywhere in the world?

In the classes he was attending at Columbia, Aamir was used to hearing professors ask questions. Why is this novel structured thus?

Now, he paused. He wanted to be truthful with Piya, he wanted to say something that was true and touching.

He had read somewhere that an artist was taking photographs of keys that Palestinians had kept for the homes they had lost. Keys unlocking stories of lost history.

He said he had liked the boat they had just seen at the museum. It was a work by Subodh Gupta. A large ordinary boat, the kind he had seen countless times on the Ganga. This one was loaded with blankets, pots and pans, and even a chulha. It was as if a great flood had come and someone was trying to carry away to safety everything he owned. Here in New York, however, the boat had a different meaning: a migrant who, despite all the baggage he must carry, is still afloat.

Piya said that she had been more intrigued by a bed at the exhibition—placed not on the floor but, like a picture frame, hanging from the wall. She said, I liked that bed and its two pillows. It was more playful.

Play. He should have thought of that!

Aamir said, In our schools, we are taught to make art for Mummy-Papa. He was thinking of all those dull pictures of mountains, the moon, or palm trees over a peasant’s hut. Waterfalls. Flowers. Cows grazing. Those were the things he would draw in school during the Art period. He would look out of the window of his class and see a boat going by on the river. Perhaps that is why he had liked Gupta’s art.

Piya said, That bed tells you that you aren’t going to get any sleep.

She was smiling because she wanted to cure him of his earnestness. She didn’t have his sense of nostalgia. Piya wasn’t sentimental in that way, didn’t need to be, perhaps. Her rebellions were enacted against the backdrop of a different canvas. She wanted play; he wanted his past.

As soon as that thought entered his head, Aamir became surer of himself. He said, There’s play in Gupta too, I’m sure. The artist might have been taught that museums were only for statues or for beautiful things. But he has parked a big boat here. He wants you to come and look at a dented bucket.

Piya had a sly smile on her face. She said, You’re probably right. He’s having a laugh. I think he’s laughing all the way to the bank.

Amitava Kumar is the author of several works of non-fiction and a novel. The New York Times described his book A Foreigner Carrying in the Crook of His Arm a Tiny Bomb as a “perceptive and soulful … meditation on the global war on terror and its cultural and human repercussions.” He teaches English at Vassar College in upstate New York. His website is www.amitavakumar.com and is on Twitter @amitavakumar.
Tags: After Midnight, Apur Sansar, Columbia, Queens Museum, Subodh Gupta

Good Girls Don’t Say Such Things
'We saw innocence and wisdom in the dark, leather-faced fishermen in Colaba, their broken down canoes resting ashore amidst tin shanties with colorful blankets bleached by the sun and salt of the Arabian Sea'