Remembrance is always constituted by forgetting. My fear is that Fred Ho will be remembered for his bold aesthetic style and his swinging avant-garde Afro-Asian music, but forgotten for his hard-hitting, transgressive politics. Yet Fred consistently argued that politics and culture were intertwined. His life is an irrefutable example of ferocity in activism and music.

There’s no denying that Fred’s style is captivating. His musical composition and saxophone playing—colorfully intensive, sometimes a jarring cacophony, but more often soulful, imaginative, and deeply meaningful—were reflected in his aesthetic style and philosophy. He loved colors, textures, and designs that represented Asian and African cultures. He hated off-the-rack clothes and the wearing of all black—b-o-r-i-n-g, he called them. But how could one condemn consumer culture and garment industry exploitation and then drape oneself in such ostentatious display? Two of Fred’s practices offered partial solutions to the materialism and waste of our consumer culture: producing more while consuming less, and increasing self-sufficiency. He prided himself on being a self-taught, auto-didactic musician and a semi-luddite, composing his music by hand and rejecting synthetic sounds. He loved to explore thrift shops to find second-hand Japanese kimonos, Chinese silks, and African mudcloth. He designed his own clothes and shoes, including his beloved dragon-panther boots. He walked hard and fast and drew stares at his larger-than-life visual spectacle. But he also had a rather small closet and, true to his anti-accumulation politics, he regularly gave away clothes and belongings. My husband Matef was a fortunate beneficiary in a gesture of Afro-Asian solidarity and aesthetic pleasure (Fred liked the way his clothes looked on Matef).

So it will be hard to forget Fred’s style and music, as was portrayed in the many tributes and obits to Fred on alternative radio programs, progressive blogs and newsmagazines, and in the New York Times. Film offers a particularly effective form for capturing Fred’s oratory style, personality, music, and aesthetics. Steven DeCastro’s recent documentary, The Last Year of Fred Ho, does so powerfully. I’m grateful for this outpouring of respect paid to Fred.

But I fear that we’ll remember Fred’s evocative style, but forget his penetrating political substance and his important contributions as grassroots organizer, political theoretician, and writer. His activism was more than music-based justice work, just as his music was more than activist-based art. Born in 1957, a decade later than most ’60s activists, Fred’s politics were shaped in the political milieu of the 1970s. For many this signified the dying of the ‘60s experimentation with transformative politics. But to Fred, the ‘70s represented the turn to Marxist-Leninism. Working in I Wor Kuen and the League of Revolutionary Struggle, Fred argued for an analysis of national oppression, not race per se, and was proud to work in groups that were majority oppressed nationality and majority women. His ideas in this period are contained in the collection of his writings, Wicked Theory, Naked Practice, which he charged me with getting published when his cancer was first diagnosed.

His ideas linking imperialism, capitalism, White supremacy, and patriarchy remain a core part of his ideology. But when he began talking about replacing large-scale planned economic development with locally produced goods, working on a farm once a month, and participating in a restaurant cooperative, I could sense a shift. When I edited Wicked Theory, Fred gave wide latitude and accepted virtually every suggestion for change. Granted he was dealing with cancer, but something else had changed. The intensity and purpose-filled drive were, of course, still present, but there was also a more relaxed and more trusting way that reflected a change in Fred’s philosophy towards localized and autonomous decision making. While Fred often overstated the newness of his ideas—developed in collaboration with Scientific Soul Session members—he spoke with a clarity of analysis and precision of language that provoked new ways of thinking and got folks excited.

Fred was also an on-the-ground organizer and networker. He came to admire the political thinking of Russell Maroon Shoatz and devoted the last period of his life to developing a campaign to get Maroon out of solitary confinement and then out of prison. According to Ayanna R’auf, Maroon’s fiancée, Fred was the brainchild of the successful campaign that did what for years seemed impossible—ended Maroon’s 23 years in solitary. Those efforts included Fred co-editing (with Quincy Saul) a collection of Maroon’s writings, Maroon the Implaccable, organizing a nationwide speaking tour, and generating relentless letter-writing and phone-calling campaigns.

Fred denounced social and environmental toxicity as the causes of cancer and linked the huge spike in cancer to the growing degradation of the earth and of humanity. He claimed to have stopped using all plastics, except the equipment needed for his cancer treatment, and even changed to a raw food, no sugar diet. This was no easy task for one who ate with as much pleasure and voraciousness as Fred. I once came back to his place to find that in a single afternoon, he had consumed an entire fresh berry pie that he made, and this was after he had had intestinal pains the day before. Fred would say things like, “Social toxicity is a matrix of over-accumulation/obesity, the treadmill of competition/comparison/ achievement/stress, aggression, inequality and technological fetishism, alienation, all the factors that prevent and block psycho-social equilibrium and health.” He tried hard to rid himself of competitiveness, aggression, and ego as a way to regain his own health equilibrium. And he never stopped fighting to heal the earth and this society. He married ideas on ecosocialism (requiring the submission of humanity to ecology), matriarchy (to develop a society where gender is irrelevant), Indigeneity (respect for the land and re-learning holistic ways), and creativity (daring to dream the impossible), with his earlier critiques of capitalism, imperialism, and White supremacy. Fred was skilled at deploying sound bites such as these, but his ideas were much more fully developed.

On Eric Mann’s recent KPFK radio program, Robin Kelley noted that Fred never got any of the university faculty jobs that he applied for, but given his brilliance and originality, those of us in the academy and beyond need to teach Fred Ho’s ideas and music. Check out the books and music by or about Fred, including Fred’s writings in Wicked Theory, Naked Practice and Cancer Diary; Roger Buckley and Tamara Robert’s recent anthology, Yellow Power, Yellow Soul; Afro Asia, with Bill Mullen; Legacy to Liberation on the revolutionary Asian Pacific movement; the many YouTube and Internet stories and videos; and Fred’s own website, www.bigredmedia.com.

I end with one of Fred’s favorite quotes. He regularly cited Sun Ra: “Everything possible has been tried and nothing has changed. What we need is the Impossible.” While his words are rather dismissive of the change that has occurred through activist efforts, he insisted that the current conditions of suffering and oppression require even greater creativity and daring. Fred saw his role as “playing the music and doing the politics that no one else can do or will do.” We’ve lost a fierce warrior much too young, but he’s still very present, demanding that we all work harder, do more in the struggle for revolutionary change. From the beyond, he continues to kick my ass into being a better thinker and a better fighter for liberation. I will always carry Fred—his politics, his music, his audacity, his example, his friendship and love—in my heart, in my mind, and in my practice. I will be forever grateful for having Fred as a deeply meaningful part of my life. 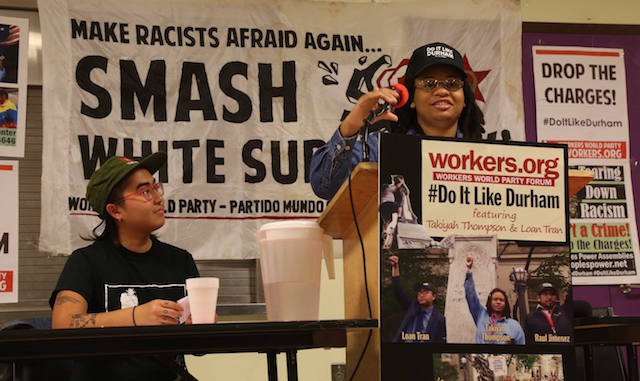 Tearing Down White Supremacy: Takiyah Thompson and Loan Tran
Two Durham-based activists talk about pulling down Confederate statues, the poetry of displacement and war, and the sustained work behind every protest 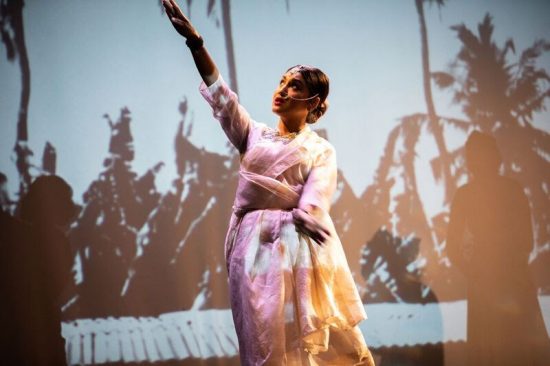