Kazim Ali spent four years after college advocating for equitable public higher education as a political organizer, and all that while poetry was tugging at his heart strings. Born in the UK and raised in Canada and the US, Ali is a poet, essayist, fiction writer, yoga instructor, translator, and Dungeon Master. His books include four volumes of poetry, the most recent of which, Sky Ward, was published this February. He’s also published two novels, Quinn’s Passage and The Disappearance of Seth, and two collections of essay, and is currently working on a new novel, which we should all keep an eye out for.

When Ali is not teaching Creative Writing and Comparative Literature at Oberlin College, editing at Nightboat Books, or teaching at Stonecoast’s MFA program, he dances on weekends, rolls around town in his mini-scooter, and uses his poetic imagination to create detailed narratives that an intensive D&D adventure requires; he’s certainly a storyteller. Here’s Kazim in our weekly Q&A series, Studio Visit.

What’s on your nightstand now?
City of Rivers by Zubair Ahmed
Thank You for the Window Office by Maged Zaher
I, Lalla: the Poems of Lal Ded translated by Ranjit Hoskote
The Uprising: On Poetry and Finance by Franco Bifo Berardi
Airport music by Mark Tardi

What superpower would you most like to possess?
As a story-teller, I would have to go with the Will and the Word, from the fantasy novels of David Eddings. It was a concept of magic that required verbalization and also relied only on creative energy—you had to work with the matter of the universe, you couldn’t “unmake” anything. 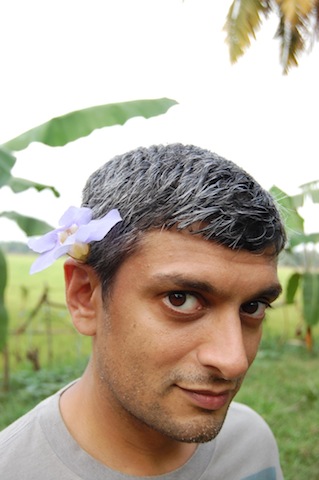 What role does place have in your writing?
The body, wherever it is, is also a place and the mind—including what we often refer to as a writer’s “voice”—is part of the physical body, so all writing stems from “place.” The imagination is either a pipeline directly into the spiritual ether or underworld or it is the cognitive feedback of electro-chemical processes in the brain. If it is the former, it is sure generated by physical surrounding, if it is the latter then proceeds from the body itself.

In either case, mountain or desert or ocean, a human is stitched to the fabric of the planet.

But to be practical: I did write a whole book (Bright Felon) all about—among other things—how the urban geography of city acts upon experiences of the human individual. So no wonder I wander.

What songs are on your iPod now?
I don’t own an iPod but these are the CD’s uploaded into my computer for constant and easy replay:

What is your writing process?
I work on something for a long time, many pieces at once. I write and then I type up and keep the packet, making notes and revisions over a long period of time. When the packet is covered in marks, I type a new version, adding things, taking things out. Eventually a book coalesces under my hands.

I prefer not to be intentional. But intention reveals itself in the last stages.

Bright Felon was not like that. That book I wrote quickly (over four months) and with a specific outline in mind. Also that book I typed in the original draft which is atypical for me, normally I hand write the original drafts, whether poetry, prose or translation.

What are you working on right now?
I’ve recently finished and published a new book of poetry called Sky Ward.

I am now thick into working on three projects: 1) my next manuscript of poetry, called Psychophonic; 2) a book of lyric prose/essays that continues in the style of Bright Felon; and 3) I am finishing work on a translation of a book by francophone Indo-Mauritienne poet Ananda Devi.

What’s your guilty pleasure?
No pleasure is guilty except that which depends on the suffering of other human or animal beings. I still try to go out dancing on the weekends whenever I can rustle up a crew to go with me. Sunday afternoons you may often find me at the roller rink. Then there is a group of faculty and staff at the college who play Dungeons and Dragons (1st edition rules); I’m the Dungeon Master—of course!

What did you want to be when you grew up?
A kind and compassionate person who worked for the betterment other beings, both human and animal.

I worked in social justice organizing for many years after I graduated from college but poetry had a hold of me the whole time and eventually I had to answer that ringing phone.

Kazim Ali 's books include four volumes of poetry, "The Far Mosque", "The Fortieth Day", the mixed genre "Bright Felon: Autobiography and Cities" and "Sky Ward". He has also published two novels, two collections of essays, as well as translations of poetry by Sohrab Sepehri and a novel by Marguerite Duras. In addition to being associate professor of Creative Writing and Comparative Literature at Oberlin College and founding editor of Nightboat Books, he teaches in the Stonecoast MFA program and is a certified Jivamukti Yoga instructor.
Tags: Kazim Ali, Studio Visit, fun facts, process

Studio Visit: Henry Chang
A native son of Chinatown and the Lower East Side, the author of the Detective Jack Yu series makes a mean pitcher of Bloody Mary.