A century ago, a ceremonial cannon stood in the heart of Omonia Square, the traditional commercial hub of Athens, along with palm trees and a fountain. The cannon has long since vanished, and era after era of urban renewal has seen the loss of the trees, and finally, in 2000, the loss of the fountain. Each new generation of leaders in Greece, be it militarily imposed or democratically elected, has sought to impose its will on Omonia.

In the place where the fountain once stood, a long, ugly concrete bench extends through the heart of the square, which now is shaped more like a bulbous teardrop. The bottom of the tear no longer falls because the street has been blocked off from traffic. Instead it melts into a maze of streets at the south end of the square. Here, a stainless steel mobile rising fifteen meters, designed by the artist George Zongopolous, clanks noisily in the wind and hovers, unattractive, like a happenstance monument to all that has been lost. 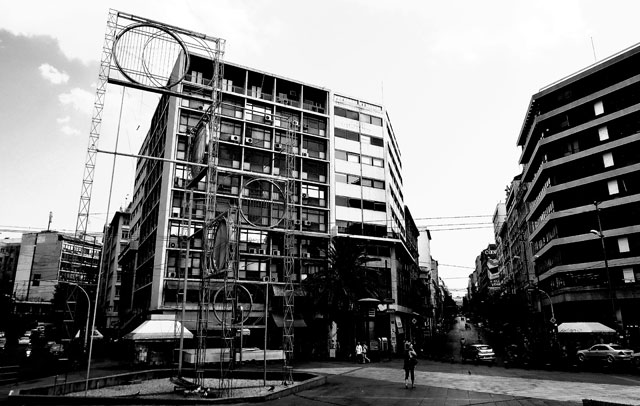 I arrive in Athens on the last day of July, when the majority of Athenians are fleeing the humid, stinking city for the relief of the islands. My hotel, not far from the square, shares the block with what look to me like three brothels—or local clubs or cafés doubling as brothels. Throughout the day, the women stand on corners or sit at the café tables, eyeing me as I pass. Many of their customers are South Asians—likely Bangladeshis or Pakistanis, as most of the South Asian men here are from those countries. I watch as one man after another walks up to one of the women. They converse at length, until finally she says no, or he doesn’t like the price. If they agree, they walk away together, sometimes hand in hand, like real lovers.

At night, the junkies take over the square. They are almost vaporously thin, like the dead even before they shoot up. They have ruined most of their veins and bend forward to stick the needle in the backs of their knees or other parts of their legs. The happy ones are curled up fetally, oblivious to everything. A tall South Asian man with a tense, fierce face asks me several nights in a row if I want anything. “Hash? Junk? Anything?”

On a side street, a beautiful young woman drops her lighter and topples forward, her body bent at the waist and her hands dangling to the ground. I watch as she struggles for minutes trying to pick the lighter up. Her fingers are unable to take hold of it, and she fails each time. Eventually, she just stays bent over like this, suspended and unmoving, hands thrown down, the lighter in reach but ungraspable.

In the mornings, the square is a sea of old syringes. 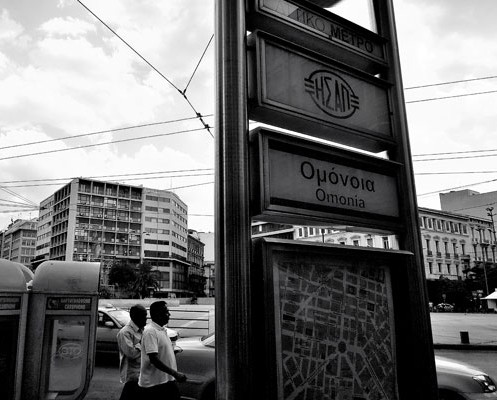 Omonia Square and the streets around it are alive with immigrants—Senegalese, Congolese, Turks, Afghanis, Kurds, Serbians, Russians, Bangladeshis, and many others. Some work in the shops, while others just stand around, leaning against the concrete pillars of half-wrecked buildings, fanning themselves in the heat. Some chat regularly with the waiting women, and I wonder if they are the pimps.

A woman in her thirties stops me on the street and asks if I want to go to her store. “It is a sex store,” she says. “We have things for all kinds of sex.” I follow her for several blocks through narrower and darker alleys until we reach a door that leads into a basement hallway crowded on all sides with kitschy furniture and replica suits of armor. At the end of the hall is the store.

The proprietress, a woman in her sixties wearing a doctor’s white lab coat, tells me to look at anything I like. There are rows of dildos, inflatable Chinese dolls, DVDs, even stacks of old VHS tapes. “We are the oldest sex store in Athens,” she says, and asks if I want a bigger penis. “The men from your country all want this. They come in all the time. Bangladeshis and Pakistanis and Indians. We have the best equipment. It is guaranteed by the ministry itself.” I don’t ask her which ministry approves and tests such devices. She shows me a video demonstration of how large my penis will become. “You see,” she says, “you will soon be very, very big.”

A friend tells me that in the fifties and sixties, if two people were coming into Athens from the country, they’d say, “We’ll meet in Omonia.” You can see it in the old movies, she says, scenes of Omonia the way it was, with friends greeting each other. “No one says that anymore,” she tells me. “No one wants to meet here. Who would want to? Look at it. Today they meet at the square at Syntagama.” 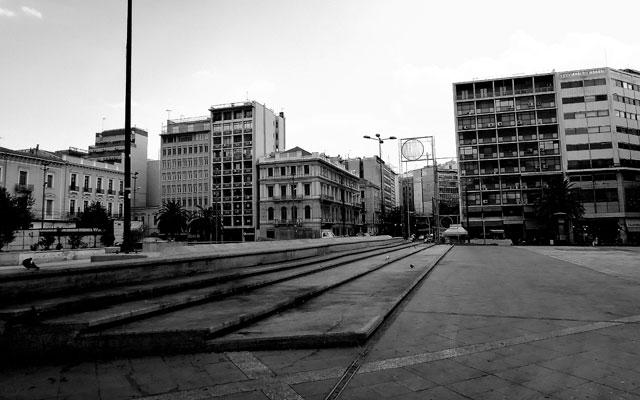 A week after I arrive, it is morning and the streets are flooded with police. Groups of mostly South Asian men are being led away in groups, flanked on all sides by armed officers. Locals and tourists stand on the sidewalks and gawk. Armored vehicles are parked on all sides of the square and three large buses, which had brought in the officers, stand idling in the side streets. I pass a group of South Asian men who are lined up against a wall; several police officers are questioning them one by one. One of the men waiting to be interrogated sits dejectedly with his head in his hands. I pull my camera out and take a picture. As soon as I do this, I’m called over to join them.

My own questioning is brief. The officer asks for my papers. Who am I? Where am I from? What’s my hotel? And so on. The questions sound old-fashioned, like something someone would say in a World War Two flick. I don’t have my passport with me; instead, I pull out my wallet and present my New York driver’s license. I can’t remember the name of my hotel and wave vaguely in its direction, two streets away. The officer stares at the license for a minute and shows it to his buddy. They both stare at it. “Tourist?” he says suspiciously. I nod, “From America.” Eventually, he hands the license back and shoos me away. As I walk, I pass two Chinese men coming toward me. They get pulled in, too.

The crackdown on migrants is citywide, but much of it is centered on Omonia and the neighborhoods immediately surrounding it. It’s been ordered by the government, partly in response to pressure from the neo-Nazi Golden Dawn party, which recently achieved, for the first time, a position in Parliament. One of their election slogans announced they were going to “sweep the scum out of Greece,” the scum being immigrants, legal and illegal. Most of the Greeks I meet believe there is a problem with immigration, that crime around Omonia has gotten out of hand, and that something needs to be done. One woman tells me, “They come here and live like garbage. Of course we should send them back.” She hates the fascists, but she also hates the immigrants, at least the illegal ones, she says.

The first round of the crackdown lasts a week. In the papers, I read that thousands have been arrested, all across the country, and many sent to detention centers and scheduled for deportation. I learn to walk differently, with more confidence and a little swagger. It’s the easiest way I can think of not to be detained again. It works. I pass through groups of officers unhindered, though I often notice their eyes following me, seeming to question whether they should stop me, confused: Am I a Greek? Am I a tourist? Or am I one of the others, the ones who shouldn’t be here, the ones branded as so-called illegals?

The number of non-white faces I see around Omonia quickly begins to diminish, and soon the streets feel empty at many hours of the day. The South Asian drug dealer who stops me most nights is still here, but gone are the young men who stood around idly chatting with the prostitutes. Whole swathes of the sidewalk stand empty now. The women are still here, and I’ve come to know most of their faces. They huddle in bored circles, talking among themselves. Many of their customers have vanished. One of the women I recognize, whom I’d seen every day, appears one morning with a nasty black eye. She’s been beaten up by either a John or her pimp in the night. Her eyelid is so swollen it has completely closed over the pupil. She hurries past me, visibly angry, and disappears. 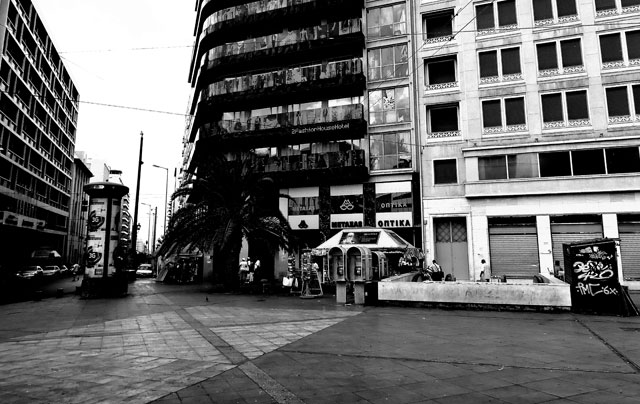 The immigration laws of any country can flip on a dime. Those who are classified as illegal one day, could quite easily have been legal a few years earlier, and might well be legal again months or years hence. These laws fluctuate with the tides of public sentiment and (perceived) national necessity, particularly in periods of economic hardship or high instability—tightening and “enforcing” them allows people to more easily give vent to personal frustrations. But the lives they disrupt cannot be easily repaired (or repaired at all), and what sounds like a simple decision—to send the lawbreakers home—is often neither about lawbreakers or about home.

One morning, as he does every morning, a Bangladeshi man helps a middle-aged Greek woman unfold two long tables and arrange various piles of pornographic DVDs and magazines across them. I watch as they work, pulling the magazines from their boxes and stacking them next to each other. There is an easy camaraderie between the two, and they talk and smoke cigarettes as they work. He is one of the lucky ones—he has papers. I think of all those who didn’t, and who for lack of papers are now but the newly fashioned ghosts of Omonia Square.

Ranbir Sidhu ’s first book, Good Indian Girls, will be published by Harper Collins India this fall, and his first novel early next year. He is a winner of a Pushcart Prize in fiction and a New York Foundation of the Arts Fellowship, among other awards. He took the photos that appear alongside this essay. Learn more at ranbirsidhu.com.
Tags: Athens, Detained immigrants, Greece, Immigration, South Asian, interrogration, law, nightlife, police, sex