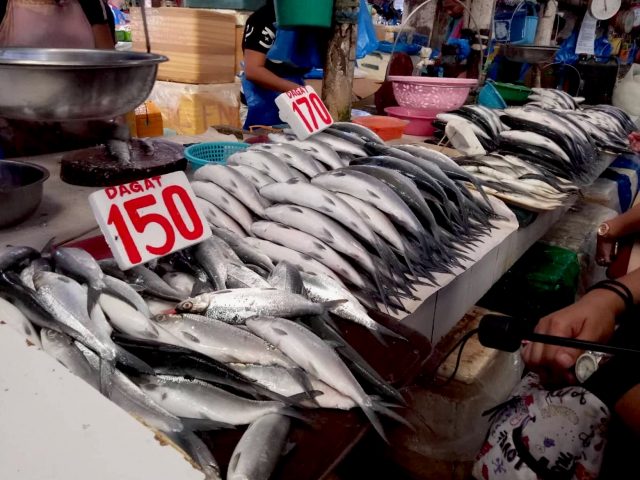 Transactional. It’s a word that, describing relationships, often bears a certain coolness: a calculated balance, a clean exchange, a settling of scores. Exchanges of money, in theory, are not meant to stir human emotion, leave an impression, or create intimacies between hands. And while the market can be an abstract structure of faceless trade among unsentimental brokers, or a euphemism for capitalism’s sterile fantasy, the market is very much a physical place, a human affair operated by breathing beings, where the rawness and wetness of life and death, sustenance and smell, loss and memory all meet.

The latest folio of the Transpacific Literary Project, Trans:Act, explores the market as a lived and located place of exchanges. We open the folio with a piece by Nikka Cornelio-Baker who visits the tiangge | marketplace of her childhood in Dumaguete City, Philippines. Moving through this place of charged and abundant sensory experience, any abstract notions of the market or its sleek, transactional cool are quickly drowned in smell, sound, and even blood.

Like far-reaching ripples in a quiet pond, the language of the ancient Aztecs reappears half
a world away in the Cebuano word “tiangge” /‘tʃaŋ.ɡi/. It is derived from “tianguis,” a word
for open-air market used exclusively in Mexico and Central America, which in turn has its roots
in “tiyanquiztli,” a Nahuatl word meaning market or gathering place. Crossing over from the
Americas to Asia in the holds of ancient wooden ships, the word “tiangge” reverberates with
echoes of the Manila-Acapulco galleons of colonial Spain, which for two and a half centuries,
used the Trans-Pacific trade route to bridge their colonies in the East and West.

Cebuano (or Bisaya) is the second most spoken language in the Philippines after Tagalog (or
Filipino). It is widely used in most of the central and some of the southern regions in the country.

The tiangge of my childhood is a womb.

My mother takes my hand and together we plunge into a confusing, thrumming, vibrating soup of human interaction.

“Watch where you’re going,” she calls, reminding me to be wary of stepping into puddles of dank, fetid water discoloured by the passage of a hundred other feet before my own. I follow her blindly, guided at first by the pressure of her hand on mine and the sharp clickety-clack of her bakya. The glare of sunlight behind us, our eyes slowly adjust to the darkness, revealing a rabbit warren of stalls lit by naked bulbs hanging from the ceiling, vendors all vying for attention.

A third of the tiangge belongs to the fish vendors. To present fish as fresh from the sea, recently caught, instead of having spent at least two days in a giant icebox, they routinely bathe their wares in water. These sporadic baptisms leave their effect on the floor of the tiangge, its floors perpetually slick and shiny.

No one in their right mind ever wears their good shoes to the tiangge. The prudent, like my mother, use bakya, wooden clogs sanded smooth, woven jute uppers fastened on each side with tacks. They elevate the wearer and make noisy clomping slaps against the pavement, the sound like horses daintily clopping along, a staccato accompaniment to the discordant cacophony of fishmongers hawking their wares. Their cries are like music to my ears, the mysterious names of fish tripping off their tongues an aural assault.

Rabbitfish, caught the night before. This piques my mother’s interest. Drawing near, she bends closer to inspect it. “It’s the eyes,” she explains. “See their eyes? They’re clear. Unlike those.” And she points with her lips to the stall beside us, at a pile of silvery scaled fish, their eyes blank, red sclerae staring into nothingness. “Their eyes are red. They’ve been dead far too long.” This, and that the best time to buy fish is after a full moon, are things I learn from my mother. Red eyes. Bakya. And full moons.

The fishmongers’ stalls are surrounded on the periphery with stores selling dry goods. There are baskets filled with mung beans. Open bags of rice. Woven wicker trays hold a wealth of tomatoes, onions, garlic, red peppers, ginger, chayote, squash, hairy tubers and root crops. Individual sachets of cooking oil, star anise, peppercorns and other spices dangle from the rafters like multi-coloured tinsel. The smell of the sea is always in the air, the sharp tang of dried fish a constant. Pungent mounds of aggressively pink uyap—fermented krill—sit cheek-by-jowl beside sacks that spill over with coarse sea salt, and tubs of ginamos—tiny, silvery anchovies floating in a murky grey soup.

“We need salt,” my mother reminds herself, sauntering over.

“Pilang takos?” How much for a scoop?

The vendor obliges, her takos the bottom half of a plastic water bottle that has been sawn in two. She fills a transparent bag with white crystals wrested from the sea by the power of the sun.

The tiangge of my childhood is a portal.

My mother takes my hand and together we walk straight into a tableau of gore. The quiet of the meat vendors sits in stark contrast to the hubbub of the fishmongers. Animal parts hang on spikes for display, protruding rods of ribbed iron, the kind used to form the bony skeleton of a concrete wall. Whether they are stained from rust or blood, I can never tell. Pig heads dangle, held up by their ears. Chickens are impaled through their eyes, stripped of their feathers, hanging naked and goose-fleshed. Neat slices of meat are heaped in mounds arranged for maximum effect. Like the fishmongers, the meat vendors’ stalls are white tile. Unlike the fishmongers, theirs are dry, glazed with a patina of blood and meat juice, perpetually discoloured by smears of pinkish brown.

My mother scans the array of options, weighing her choices. I struggle to read handwritten signs made from the torn-off sides of boxes, prices hastily scribbled on with black marker.

“Duha ka kilo,” my mother instructs, pointing to a slab of pork.

The butcher removes the meat from its hanging vantage point and lays it on a giant chopping block. Made from the trunk of an old tree, it is scarred and weathered by continued use. He hacks off a piece and slides it carefully onto a stained plastic dish suspended from an analog weighing scale. He watches the gauge steady itself, grudging each extra gram, ensuring my mother gets exactly what she asked for: two kilograms of the finest meat money can buy.

Sometimes she eyes the scale suspiciously.

And the butcher hastens to reassure her.

Sometimes she requests that part of the meat be ground. The butcher cuts a portion into chunks, stuffs it through an old silver grinder and turns the crank. His arms are corded with effort as ribbons of red mince spurt from its metal holes.

I am witness to the unadulterated rawness of death. There is no attempt to explain, no attempt to assuage my conscience. My mother does not ask me to wonder if, in life, the creatures on the chopping block have been treated humanely. She says nothing. She expects nothing and I am allowed to absorb the finality, the usefulness, the purposefulness, of death. She points at the meat she wants, pays and moves on.

I close my eyes and I am there, in the tiangge of my childhood.

I am there, in the belly of a sentient being, where young children weave catlike through the legs of grown-ups, their little hands clutching offerings of lemongrass, garlic and small red tomatoes. Where currency is crumpled and stained, flecked with the scales of fish and the blood of cattle, stuffed into pockets to be counted out at the end of the day. I am there, where fruits glow like jewels, the air is perfumed with their scent, and life, death, salt and the bounty of the earth are as irrevocably intertwined as my mother’s hand in mine as she leads me out of the maze. We exit the portal and leave the womb, emerging back into the sunlight, blinking.

Nikka Cornelio-Baker was born in the Philippines and holds a degree in Mass Communication from Silliman University. Her work has appeared in The Cebu Daily Inquirer, Zee Lifestyle, and the Dumaguete Metropost. She lives in Toronto.
Tags: Nikka Cornelio-Baker, Trans:Act 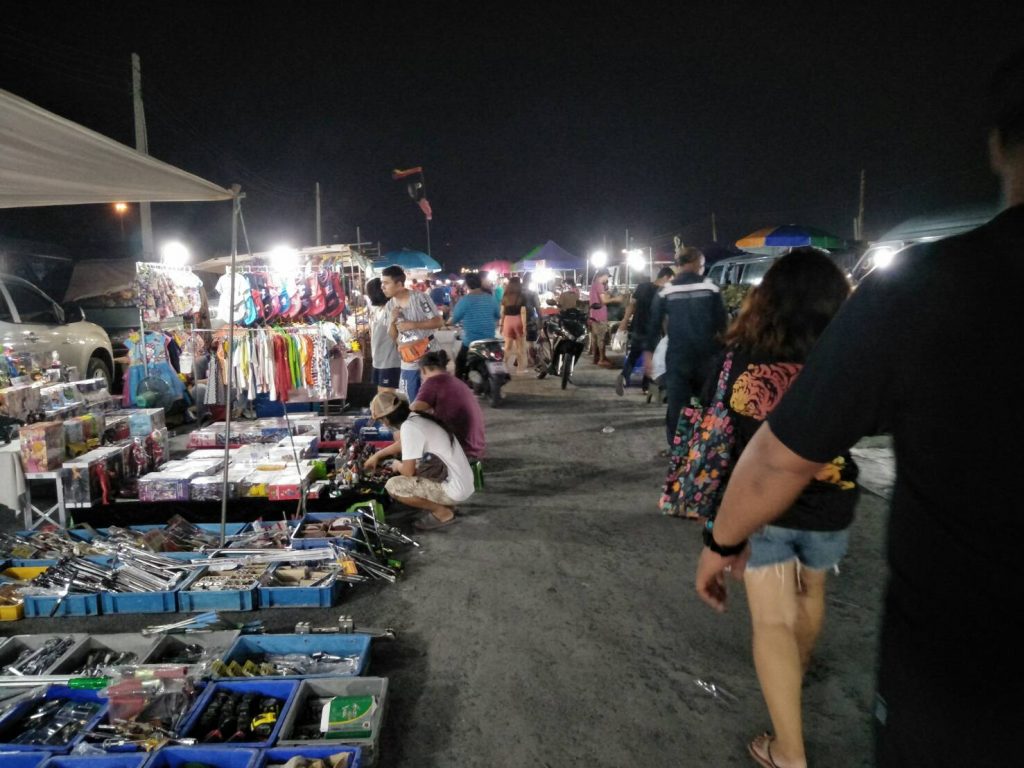 ตลาดนัด | The Flea Markets
รองเท้านักเรียนคู่นั้นยี่สิบบาทเองหรือ || These school uniform shoes are only twenty baht? 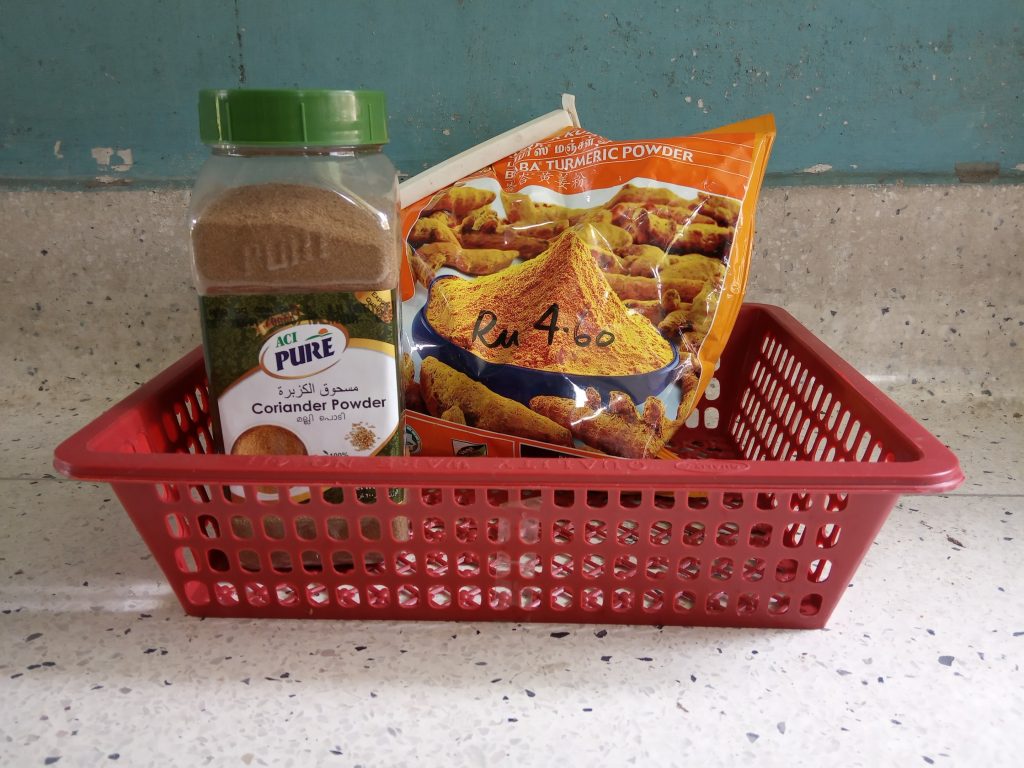 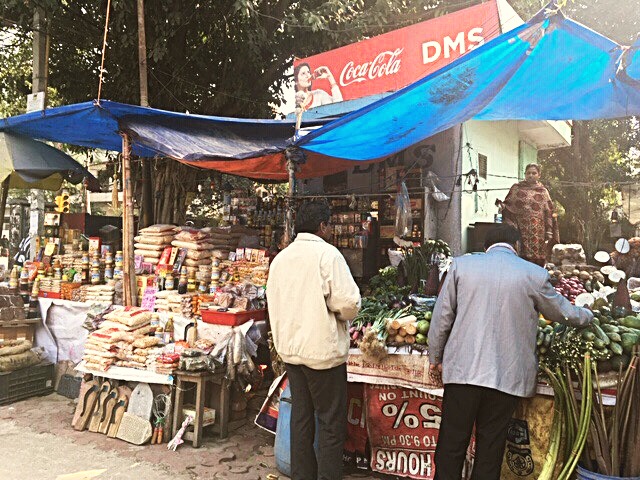 Kaemon accho? Shob thik?
Grandfather would have bought the Ilish—not wincing at the 1200 rupees per kilogram