Sometimes, I only want to eat the skin. 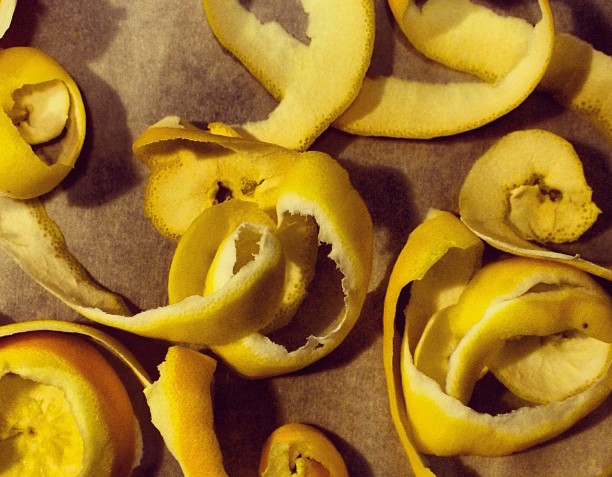 “―peeling fruit for someone is a sign of tenderness, love.”

I can picture my mum’s hands most clearly when they are curled loosely around a piece of fruit.

Usually a mandarin, the thick-skinned variety, with ribbons of orange peel twirling around her fingers. Sometimes a lychee. She uses her teeth to crack open the skins. Other times it’s a bite-sized ladyfinger banana, the sort that carries with it a heavy, honeyed scent. In a single movement she unpeels the banana and pops it in her mouth whole. I follow her lead.

Mum collects our peelings and tips them into the blue compost bin at the bottom of our seaside garden in Wellington. Throughout the year she spreads the rotted compost, mixed with soil, at the roots of plants and trees in the garden: beneath the lemon tree, the feijoa tree, and the wonky, slow-climbing apple tree that produces three or four sour fruits each autumn. I pick the apples once their cheeks begin to redden and wash them in the sink. Mum cores and peels them while I roll out the pastry. We toss the pale slices in cinnamon and dark brown sugar.

My best friend in high school hated the pithy strands that remained on her small unpeeled segments of mandarin. Mid-winter mandarins are always the easiest to get into, the tender skin loosened around its fruit. I became skilled at pulling away the white tendrils, delicately patterned like nerve endings, leaving a smooth unbroken surface. I pass the little bean-shaped pieces to her and pop one in my mouth. We each hold one on our tongues, enjoying the moment before it bursts.

When I was a student in Shanghai, during the long, achingly hot summers when the campus was empty of almost all students, I used to watch the man at the fruit shop peel my giant honey pomelo. I hadn’t touched another human being in months and I was prone to watching strangers’ hands. The honey pomelo, 柚子 yòuzi, is widely cultivated in China. I’d never seen one before I moved to Shanghai. The character 柚, made up of tree 木 and reason/origin 由, carries the sensation of something round and heavy hanging from a tree. Unlike most mandarins and clementines the honey pomelo is not a hybrid, but an original root species of its own: a parent to many other citrus hybrids. A grapefruit is a cross between an orange and a pomelo. Citrus fruits, especially mandarins and pomelos, are left as offerings at ancestors’ graves during Qing Ming festival. During the Lunar New Year, when they’re most abundant, mandarins are symbols of good fortune.

The cutting of the honey pomelo is a violent, tender process. For the man at the fruit shop, it begins with two hands firmly holding the fruit against the wooden board. He takes a long blade and sets it against the pomelo’s leathery yellow skin at a vertical angle. He pushes in and it gives way easily, with a soft squeaking sound. The spongy pith is thicker than I realized―almost two centimeters. He pulls the knife downward to make a long cut from the top of the globe to the base. The same again on the other side. He sets down the knife, grips the edges of the seam, and pulls. There’s that familiar sucking sound of the skin pulling away from the membrane. The sound makes me thirsty.

The pieces fall away to the floor. My jewel-pink pomelo is bagged up and handed to me for six yuan. There are empty shell-skins scattered all around the fruit shop’s tiled floor like offerings. I carry my naked pomelo home under my arm: my fragrant, sticky bundle. A sugar-sour scent follows me wherever I go. When I turn up to Chinese class eating pieces of pomelo with my hands, my teacher tells me her mother uses the thick rinds for household cleaning. She puts them under the beds and leaves them there, letting them suck up all the dust and give off a sweet scent.

At home we use one single word to mean skin, rind and peel: 皮 pí, five strokes. I’m not wholly fluent in Mandarin, but it’s a word I’ve become so used to that it’s the only one I reach for in certain contexts. “Dumpling skin” and “dumpling wrapper” don’t quite cut it, whereas pí touches on exactly what I mean to say, something halfway between the texture of skin and the practicality of wrappings.

Sometimes, I only want to eat the skin. When I was little, I was so picky that I didn’t want to eat the inside of the har gow―I used to pierce a hole with my chopstick in the shiny steamed dumpling and squeeze out the pink ball of shrimp, leaving it the bottom of my rice bowl, then I would chew on the silky har gow pí. Now, when I’m making jiaozi, if there are extra pí leftover and not enough filling, I’ll squeeze the disc into a dumpling-like shape in my fist and pop it in the pot of boiling water anyway. What’s left is a perfect, chewy ghost-dumpling.

At the breakfast table at my parents’ apartment in Beijing, we sit in silence as my mum peels a giant mandarin onto a paper napkin and passes me one of her segments. The vesicles are so big I can feel them bursting one by one on my tongue. This is a type of mandarin we can’t get back home in New Zealand. Cultivated in Korea and Japan, it’s known as “hallabong” in Korean and “dekopon” in Japanese. It has two names in Mandarin: 不知火, which literally translates to  “unknowing of fire” and 丑橘, ugly orange, because of its strange shape: it is the size of a large apple with an unsightly little bump upon its crown. After the fruits are harvested in mid-winter, the ugly oranges are left for a month to let their sugar content levels soar, making them honey-sweet and softly acidic, like raspberry lemonade.

I read an article in the Straits Times about eleven different types of mandarins and I realize I’ve been eating them all my life without knowing their names, which are like musical notes: ponkan, lukan, kinno, mikan, mandelo, dekopon. I spend hours trying to understand a Chinese webpage about ugly oranges—my reading comprehension has never been good—wanting to know why they have such an epithetic name as 不知火, unknowing of fire or unknown fire. Wikipedia tells me the name is derived from another Japanese name for the fruit, “shiranui”, which is also the word for a type of atmospheric ghost light in Japanese folklore, seen at certain times of the year near the island of Kyushu. Shiranui is said to take the form of pale red lines of light, or sometimes a flickering ball of light, appearing in the sky above the sea at low tide just before dawn.

I study each of the characters as if trying to uncover a hidden message. The strange names circle in my head like a nursery rhyme. 不知火, bright fiery fruit, 丑橘, ugly fruit of deep winter. The best oranges grow in the coldest winters.

I first tasted an ugly orange 丑橘 a few years ago when my first winter as a student in Shanghai was coming to an end, and so were the waves of homesickness that would pull me under without warning. In mid-March, the giant knobbly fruits appeared in large quantities at the fruit stand outside the campus gates. Each orange was individually wrapped in its own paper bag stamped with red Chinese characters that formed a border around the edge. They were three times as expensive as the baby mandarins I ate by the handful, which had kept me going through the wet winter. I bought just two to begin with―four yuan each. I peeled and ate my first ugly orange there on the street under my umbrella. February had been the month of baby mandarins. March became the month of ugly oranges.

When I think of home, I see the lemon tree. The yellow fruits are beginning to bulge and fall. Throughout winter and spring, the house smells of citrus rinds. Here, nothing goes to waste. Mum collects mandarin peels and cut lemon skins and places them in a dish in the oven after cooking, so that as the oven cools, it gives off a bittersweet, hot-sugar scent. The rinds begin to dry out and curl in the warmth while the dog sleeps curled up at our feet. Not far away, we can hear waves roaring in a southerly gale. Our skin smells of salt and oranges.

Nina Mingya Powles is a poet and zinemaker of mixed Malaysian-Chinese heritage, born in Aotearoa New Zealand. Her second poetry collection, titled Magnolia, 木蘭, will be published by Nine Arches Press in July 2020. In 2019 she founded a small press, Bitter Melon, and won the inaugural Nan Shepherd Prize for Nature Writing. She is currently working on a book of lyric essays.