A chapter from Year of the Rabbit, a graphic novel memoir of one family’s life under the Khmer Rouge 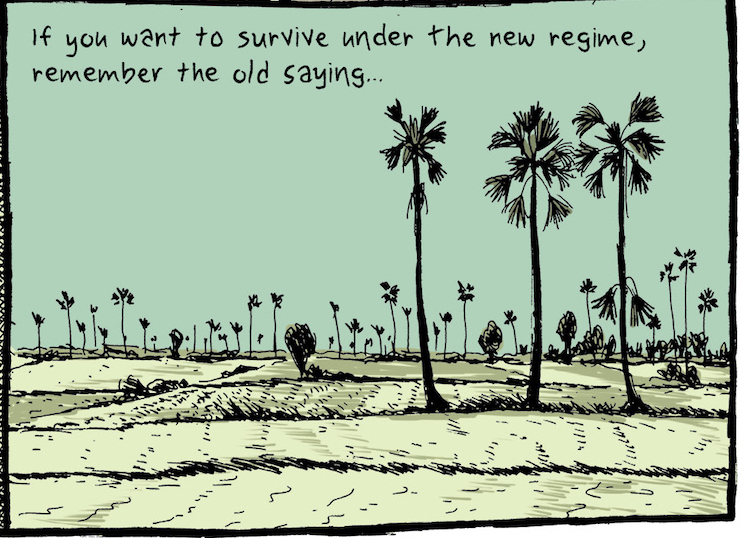 Editor’s note: May 20 marks the National Day of Remembrance in Cambodia to commemorate the victims of the Khmer Rouge genocide. The following is an excerpt from Tian Veasna’s new graphic novel memoir Year of the Rabbit, which chronicles his family’s story during the murderous Khmer Rouge regime.

It is the mark of a talented artist to be able to give the illusion of simplicity to an account of the unthinkable. This story is so painful that for years, survivors were unable to tell it to their children. The experience of chaos eats away at our insides and leaves us helpless, torn between wanting to live again and the fear of not having the strength. It’s like standing in front of a bridge that lies in ruins and looking at the other riverbank, where our souls might find peace and ease.

Conceived by radical ideologues and implemented by zealous leaders, the murderous utopia of the Khmer Rouge regime could only be achieved through the unleashing of a reign of terror, one that isolated individuals and destroyed every vestige of traditional society. Family ties, solidarity, respect, faith, compassion… All moral foundations were annihilated, just as the people who believed in them were exterminated. It was not only a matter of killing, but of erasing us and denying our dignity. How can one understand what those blackclad men inflicted on others?

But humans are not easily eradicated, and that is their strength. In Tian Veasna’s description of his family’s desperate escape, disaster is repeatedly averted through minor miracles. Like the Khmer Rouge chief who lets the young doctor get away, the old peasant who intervenes to save the family from execution, and the villager who offers his hut so the young woman can give birth. As long as humans resist, it seems as if nothing truly irreparable could happen, even when everything is collapsing and fear is destroying society. But how long can a person hold out against the spread of a totalitarian terror that only gradually reveals its true face? Where can a person find refuge when every door is locked? Who can be trusted when every movement is watched? When divulging a name can result in death?

—from Rithy Panh’s preface to Year of the Rabbit

The following is a chapter from Tian Veasna’s graphic memoir Year of the Rabbit, which was published in January 2020 by Drawn & Quarterly.

Tian Veasna was born in Cambodia in 1975, three days after the Khmer Rouge came to power. He moved to France with his parents in 1980, where he graduated from Strasbourg’s École des Arts Décoratifs in 2001. After that he returned to Cambodia for the first time, offering drawing classes as part of a United Nations humanitarian project. Since then Veasna has worked in publishing, taught visual art, and cofounded the workshop and gallery space Le Bocal, which specializes in illustration and graphic art. Veasna’s desire to recount what his family lived through in 1975 led him to return to Cambodia frequently and record the memories of his family members. Those stories became Year of the Rabbit, his first book. Veasna lives in France.