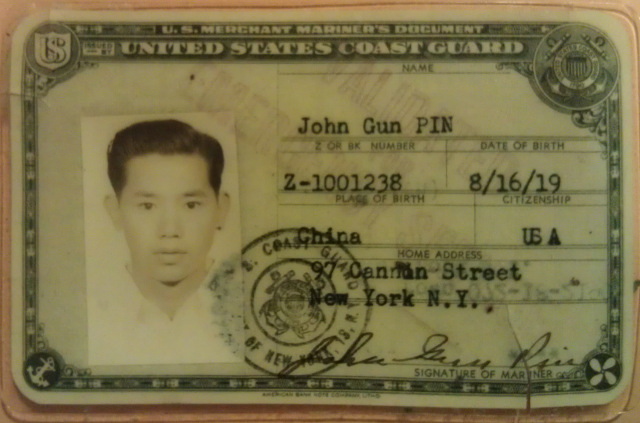 Donghai to the core, Yeh Gum Pei had a diminutive physique and a distinctive personality. I was just a teen at a weenie roast when he yelled: “I ask for da fuggin’ mussid and you gimme da godamma kechuh.” Once I entered his kitchen in a tattered t-shirt and he severed its fringes with a colossal cleaver. When a dentist quoted a high price for extraction, Mr. Yeh tied his molar to a doorknob and slammed the tooth out.

After U.S. redenomination, John Gun Pin broiled NY sirloins for the Young Men’s Philanthropic League on East 80th Street in Manhattan, and summered as head chef of Camp Idylwold for Boys on Schroon Lake, where we met in 1969. Years later, when John spoke of sailing in the U.S. Merchant Marines and cooking whatever was netted, I asked, “How did you know what kind of crab you had?” Disbelieving my naiveté, the decorated veteran of the 135th Medical Mess Detachment snapped, “A crab is a crab.”

Our no-fuss hero was born on the island of Donghai in mainland China’s Zhoushan Archipelago. He cut his eye teeth on Ningbo-style eats, an important facet of zhejiang, or Shanghai food, one of the eight cuisines of the vast Chinese cookhouse. Ningbo cooking allows natural flavor to predominate and is characteristically salty and fragrant. Locals prize soft textured seafood dishes like braised eel or fried yellow croaker, and preserved snacks that help stretch the abundant white rice, like ni law, salted molting snails with shells as small and translucent as pinky nails.

John’s Jackson Heights home was for years the closest I got to China. Fish draped with newspaper dried on lines under the eaves; the kitchen was repurposed as cousin Coco’s acupuncture studio, and televised Chinese opera monopolized a visitor’s remaining senses. The basement, which opened onto a vegetable garden with fruit trees and a patio peppered with potted alliums, had been turned into an open kitchen. Aluminum foil–wrapped appliances flanked a simple eating area, and jars of every description sat with their contents steeping, pickling, and curing in corners and on ledges selected for their particular qualities of temperature, light, and air. Eco-minded before their time, nothing in the Pins’ jam-packed fridge seemed to be in its original bottle.

John died in January 1997. His son Michael and I visited Rose Pin, his widow, a month or so later. Her cooking was subtler and more precisely executed than her husband’s, but the first thing she offered was the very last dish John had made—a bottle of ha cha—salt-preserved crab. Rose served John’s amuse-gueule but declined to partake. “Too salty,” she said.

John made two kinds of ha cha, always controlling the bottled admixtures for ullage. Both used the same ingredients, but one featured crab bodies, minced along with their shells. The other contained only claws, cracked but intact. Ha cha is best eaten by straining the chitinous bits through the teeth like a baleen whale filtering krill. Traditionally smeared over steamed white rice, the roseate Ningbo specialty has a squishy texture and, like John, a salty spiciness tempered with oceanic sweetness.

Like much traditional Ningbo cuisine, John was simple but ingenious, with a powerfully unpretentious character. Today there are 7.5 million Ningbo natives, yet Shanghai and its Shaoxing-wine soused “drunken crabs” steal the limelight.  There are few mentions of ha cha on the Internet and I have never heard of it being served in a restaurant. Other cured brachyura include the Korean chili-based yangnyeom gejang and soy-doused ganjang gejang, preparations so popular that the city of Gwangju boasts a “Street of Seasoned Raw Crab & Boiled Rice.” It seems that the only edible raw crab is the leg meat of zuwaigani (Hokkaido snow crab), which is turned into glistening sashimi. Eating more ordinary crab raw can cause serious infections from parasites like the ugly-sounding and acting lung fluke. Ha cha, ceviche, and other cured foods (think lox, ham) might appear raw to the uninitiated, but they are ready to eat.

Cut the live crab in half.  Remove the top shell. Discard the eyes, mouth parts, gills, and flipper legs. Scrub well. Using a heavy cleaver, chop the bodies into small fragments. Combine with the meat from either end of the top shell. Add approximately one teaspoon salt for each cup of minced crab, and leave for at least two days in the refrigerator. Before serving, a small amount of rice wine vinegar and sugar is added. You can also add hot chili spice. The cracked claws, and orangey-colored stuff (the hepatopancreas) are similarly prepared. As you can see nothing is wasted.

Just as Ningbo people treasure seafood, Cantonese old timers have a penchant for songbirds. Original dim sum parlors featured hooks where widowers hung their caged warblers, sipped tea, ate a delicacy or three, and pondered the ironies of agile minds trapped in ailing bodies. John Pin was no such sentimentalist—he salted crab because it tastes good.

The author is grateful for the longtime friendship of John and Rose Pin’s children, Doreen, Kenneth, and Michael, whose assistance made writing this essay a great pleasure.

Correction: This article originally misidentified the “orangey-colored stuff” of the crab as brains. The stuff is, in fact, the crab’s hepatopancreas.

Harley Spiller is otherwise known as Inspector Collector. He is an avid collector of items ranging from toothpicks to "mystery objects." He has exhibited some of his acquisitions with the Museum of Chinese in America, Cooper Hewitt, and the Queens Museum, and has written for The New York Times, Forklore and Canon Magazine. Spiller sometimes eats like he collects, thematically and in series, as when he made an eight-stop dumpling tour with a Morning News reporter in 2003.
Tags: Chinese festivals, Ha Cha, Harley Spiller, Inspector Collector, Ningbo, crab

A Quick Guide to Four Chinese Festivals
The Chinese New Year, the Lantern, Mooncake and the Qingming Festivals explained, and where to go if you are hankering for food associated with these celebrations.