Essays    Reportage    Marginalia    Interviews    Poetry    Fiction    Videos    Everything
Transpacific Literary Project
This Will Be the Day That I Die: September 21, 1972

And in the streets, the children screamed
The lovers cried and the poets dreamed
But not a word was spoken
The church bells all were broken.
—American Pie by Don McLean

One has to give it to them, the generation that felt the first blow to the solar plexus that was martial law, operationalized on September 21, though the proclamation was signed on the 23rd. Many explanations were given for this, the then-President Ferdinand E. Marcos’s penchant for cognates of the number 7 being the most popular. Those familiar with the character manifested in his political career, nay, his life indeed, would see this as a segurista move.

If martial law did not pan out in the first 72 hours, he could deny even that he ordered it. As a matter of fact, the news had been heavy with intimations of Operational Plan Sagittarius, said to be after the Greek 1967 coup d’etat, by which the armed instrumentalities of the Philippine government would allow for Marcos to suspend the Constitution, the electoral process, and to rule by decree. As with the Greek coup, the excuse given was the surge of activism, characterized as a “communist” surge, following Marcos’s declaration of a floating rate for the peso, which fell precipitously; by the time of his ouster, it had devalued 423.46 percent.

The week before the day, I had gone to Congress, trying to sniff out news, and was hailed by Marcos’s arch-critic, Senator Benigno Aquino, Jr., bouncing and running to the hall’s doors. We bantered a bit about OpPlan Sagittarius, with the senator saying, “they will not catch me lying down.” This was how, by and large, the intent to declare martial law was received: half-worried, half-amused. We knew and yet refused to acknowledge that a) Philippine politics could gestate so vile a creature as would destroy its democratic processes; and b) it didn’t seem likely that the United States would allow an auto-golpe, a self-coup in the Philippines, considering the roiling destabilization of South Vietnam under a succession of coups. We were wrong.

A Confluence of Interests and Narcissism

On August 24, 1972, the Supreme Court of the Philippines rendered its decision on a suit filed by William D. Quasha, which sought clarity as to whether U.S. citizens could continue to hold on to their property following the expiration of the Laurel-Langley Agreement in 1974. The brilliant Supreme Court Chief Justice Roberto Concepcion declared unequivocally that U.S. citizens would have no further rights to own property in the Philippines at the termination of the agreement – the legal basis for their “right” to exploit national assets like the “natives.”

Some lawmakers immediately floated the idea of taking over U.S. citizen-owned properties in the Philippines, while Marcos said he favored just compensation for such properties. The decision had implications beyond owning a home in Forbes Park. U.S. businesses had factories, plantations, office buildings, and more. As a memo from the U.S. Embassy in Manila to the State Department noted:

The main issue of these telegrams was Marcos’s maneuvering to continue in power and to gain the support of the United States for such a development. The telegrams also dealt with economic issues, especially the ownership of property in the Philippines by Americans, including American-owned oil industry property and rights. Marcos intimated that US economic concerns would be best met by US support of his political moves. US concern over the property rights of Americans in the Philippines was occasioned by a court case called the Quasha decision which, according to telegram 164964, “would appear not only to deprive US citizens of their right to continue after 1974 to own land which they have acquired in good faith under Philippine law, but would also appear to put into doubt the current validity of their titles to such land, including the ability to convey good title to a would-be purchaser.”

In sum, the memos are a narrative of the conflation of personal interests and geopolitics: the U.S. would continue to support Marcos so long as the dictatorship disguised itself as a “constitutional coup d’etat” and the Quasha Supreme Court decision was reversed – which happened in the first week of September 1972, paving the way for U.S. support of martial law.

On this day, we sang, “Bye-bye, Miss American Pie.”

The night the raiding teams went out to gather the 5,000 on the first list to be arrested, I was having a mini-despedida at my top-floor apartment overlooking Timog Avenue in Quezon City. I was supposed to leave for a journey of unimaginable proportions: through Ulan Bator to Moscow to surface in Albania eventually, only the second journalist from the West to be allowed into the closed country. A journalist’s equipment then were bulky and heavy: tape recorder, video camera, still camera, portable typewriter. Fortunately, I had little vanity and considered changing clothes once a month par for the course. That night, I had an intimation of danger: the building where the Development Bank of the Philippines blazed with lights at midnight, the first floor to the eighth floor. “Something is happening,” I said. “It’s happening all over the city.”

Overnight, I was wanted and a fugitive instead of a rising star writer. That angered me the most: THESE PEOPLE who had zero clue of the lives and dreams of those outside their circle would presume the privilege of wrecking the latter’s lives to create a fantasy of glory for themselves.

In fairness, many tried to shelter and protect people like me—from Sylvia Mayuga to Peque Gallaga to a kasambahay (maid) who waved me away from a relative’s house—as we tried to unravel the sudden chaos of the abruptly changed rules of the game. Some abetted the militarization, like one minor press person who asked, the week before, for my address to check if I were “on the list.” Sure enough, the place was raided; but I had moved out months before; something in the man’s eyes had made me wary.

For Tyranny is an incestuous Queen
Murder her brother is her bedfellow,
And the Plague chambers with her: in obscene
And bloody paths her treacherous feet are set
—Humanitad by Oscar Wilde

Eventually, I would spend six months at the Camp Crame detention quarters, among young and old, among the tortured and the bereft, while keeping an ear to the ground, to know who had been “picked up,” who had been tortured, and who had been killed. There came a time when 90 percent of the people I knew had been arrested and tortured, with the women assaulted in various ways. Meanwhile, what was left of the media—only crony media—bannered and touted the “fabulousness” of the Marcoses every single day. All the world was their stage, as they spent the accumulation of surplus wealth known as taxes and mortgaged the country for loans.

But let not that silence prevail. The first account of life in the detention camps—I wrote it under another name, which would become my underground name—was smuggled out of the country and published by the Bulletin of Concerned Asian Scholars. We also launched the underground newsletter Liberation—one team member would become a disappeared person, another killed, and our team leader would be accused, in the future, of revisionism and eventually die of cancer. But the newsletter remains to this day, as far as I know. Later, I would learn that some of the dictatorship’s propaganda centers inserted copies of it into the official hagiographic publications distributed officially all over the archipelago.

The Strike Back Commences

The week of the martial law declaration, some 200 students made their way out of Manila to the Central Luzon stronghold of Rodolfo Salas. The latter would eventually become the chairperson of the Communist Party of the Philippines. He remembered the incident a little ruefully: “We had to feed them; our month’s supply of food was wiped out in two, three days. We interviewed everyone and determined who was in danger and who wasn’t. The first, we advised to return to the city or their town; the second, we sent to fledgling bases in various islands.”

In the first five years of martial law, one was considered a veteran if one survived a year in the countryside. Friends dropped like swallows in a storm; it was five years of grief. Through it all, the writing and creation of materials to read continued—mimeographed by hand, using a silkscreen, ink, and a piece of flat wood. These were read repeatedly until the elements and use disintegrated the paper to bare legibility. And through it all, one’s personal future was replaced by a national future—a dream carried from the lowlands to the mountaintops.

When the Marcoses were allowed to return in 1992, the militant resistance was busy punishing itself for not having won. That seems to be the most just psychological evaluation of what transpired, the enormous compromise that saw the dictatorship’s clan live peaceably and burrow into the body politic for a return. The strong song petered out; that declaration of “this will be the day that I die” melted into protectionism—”protect the gains of the movement,” which, eventually, would become “let me ally with this or that warlord, princeling, tiny despot,” and still eventually, with the big despots, and even not recognizing emerging imperialism in Asia in the obsession with old and fading ones, demonizing center forces when one couldn’t take their place yet.

Through the decades, I, among others, have wondered whether it was really the ideas of resistance that carried us through the forever midnight of the dictatorship. Or whether it was the activist, the resistance member, the unnamed and anonymous who carried those ideas and made them immovable.

In the years that followed the ouster of the Marcoses, and the rise of new generations fed by social media, it seems clear that the singers, not the song, ready as they had been to give up life itself, are who made the heroic possible. No matter how small, such a population segment is worth dying for.

Ninotchka Rosca is a Philippine-born writer and journalist who has been published internationally. She has received multiple awards, including the American Book Award. Her collection of short stories, Stories of a Bitter Country was released recently. Her novel, State of War is considered a classic of Philippine literature. A resident of New York City, she is also a pioneer organizer of women of Philippine ancestry in the United States. She leads the Transnational Committee of AF3IRM, a national organization of women and women-identified of color in the U.S. with a collaborative network in various continents. You can follow her on Facebook at facebook.com/ninotchka.rosca  and on Instagram at walkingwiththeworld. 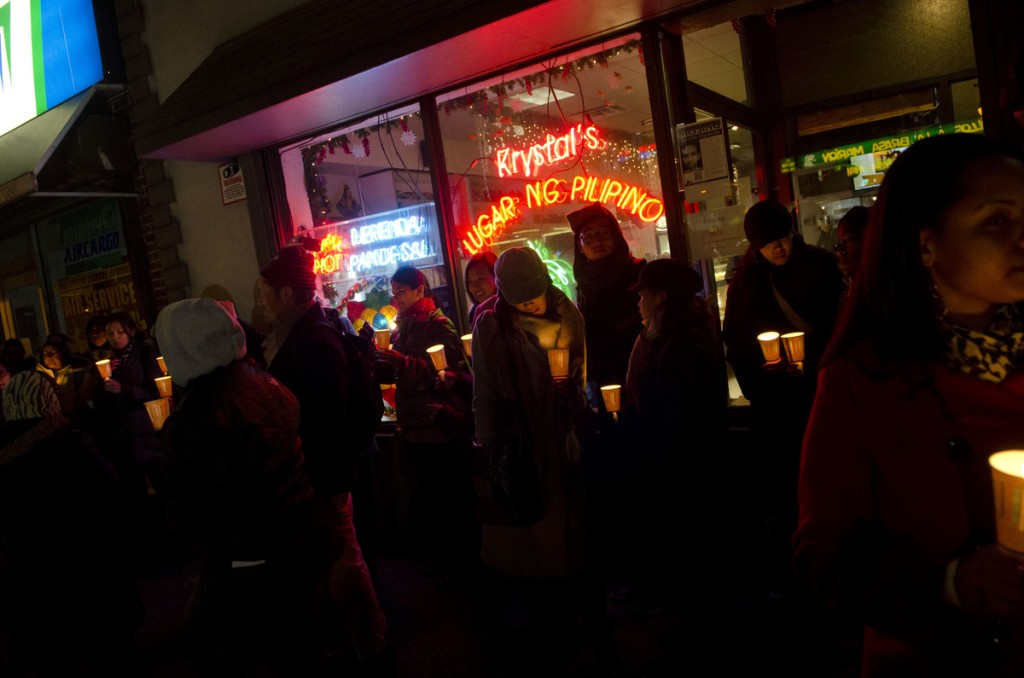 Vigil in Queens
“The typhoon really hit me hard,” she said. “I live in New York, but I’m still Filipino.” 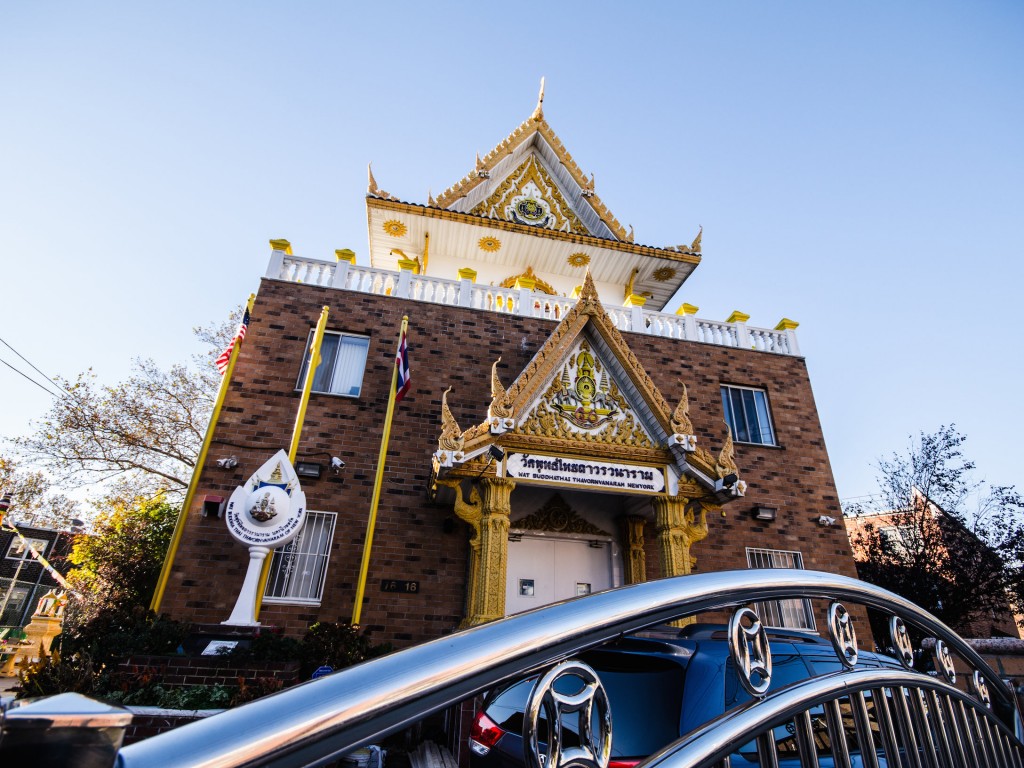 Photo Essay: ‘As Innerly As Possible’
In conversation with solitude.