Hua Hsu: Do you listen to music while you write or read?
Jay Caspian Kang: I generally don’t listen to music while I write, but when I’m in a coffee shop or a cafe and someone is talking loudly into their cell phone or another person is yapping on about Brecht or whatever, I sometimes will put on headphones and listen to one song on repeat: Death in Vegas’ “Girls.”

What about when you read? Are you the type who is sternly focused on the book in your hands?
My attention span while reading has been so shot that I can’t have any distractions at all.

I’m always accidentally taking in too much media at once—reading a book in front of the computer, listening to music while watching TV. While reading The Dead Do Not Improve, I kept having to fight the temptation of listening to music, because it’s so central to certain characters’ lives/self-definition. You did the true/false personal/not-personal thing for Gawker, and I was curious how much of the music stuff—the Townes Van Zandt vs. Johnny Cash debate, the ’90s hip-hop references—was vaguely autobiographical?
You know, the one thing I noticed while teaching high school a few years back was that the kids there listened to the same stuff I listened to when I was their age. They listened to some of the newer stuff as well, but mostly they stayed squarely in the early to mid ’90’s with the tastes. I can’t figure out if that’s because the music from back then was just better or if they’re just going through some sort of weird phase. 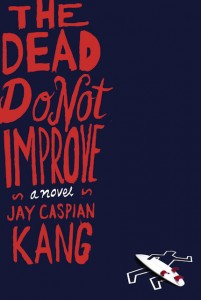 And this was the music you “lived through/with”—Wu-Tang, Black Moon, etc?
Yeah. In my own head, it’s some of the best American music ever produced and I feel fortunate to have had it around when I was a teenager because it helped change my thinking in all the ways hip-hop can change a suburban kid’s thinking, and I’m not enough of a cynic to not think that those kids I taught were probably going through something similar—it was a private school in San Francisco and the kids were just in that weird space between being totally cloistered and being totally part of the city.

That’s one of the really underrated aspects of teaching. Having this portal into a world that’s familiar to you, but defined by totally different reference points, contexts, possibilities. Do you miss teaching at all?
Sure. I miss interacting with young people who still have a lot of faith in literature and writing. Like it’s nice watching a kid read “Goodbye to All That” and then tell you that Joan Didion has convinced her to move to New York. And then watch that same kid go to school in New York. But I don’t really miss having to be that organized and I certainly don’t miss grading papers or going to meetings.

What are you working on at this very minute?
I’m toggling between a few things. One is this piece for Grantland about women’s sports and whether or not their prominence this summer indicates some sea change. The other is this Oakland school shooting piece I’ve been working on for a couple months now. I’m also screwing around on Reddit and talking to you on Gchat.

Which reminds me: I should get back my papers and meetings. Last thing: five songs anyone picking up your novel should listen to?
“Girls” – Death in Vegas
“Halftime” – Nas
“Investigative Reports” – GZA
“Diary of a Madman” – Gravediggaz
“Crossroads” – Bone

Jay Caspian Kang reads from and discusses his new novel with Hua Hsu at the Asian American Writers’ Workshop on Wednesday, September 19.

Hua Hsu teaches in the English department at Vassar College. He is a staff writer at Grantland. He is completing his first book, A Floating Chinaman. JAY CASPIAN KANG is a contributing writer at the New York Times Magazine and works as an editor at Grantland. His debut novel The Dead Do Not Improve was released August of 2012.
Tags: 90s hip-hop, Jay Caspian Kang, Teaching, The Dead Do Not Improve, music, writing

Harmonium Soul
Harmoniums are all over South Asian music. But they also connect Guyana and Punjab spiritually

We’re in the Room, Calvin Trillin
Writers respond to Trillin's doggerel "Have They Run Out of Provinces Yet?"