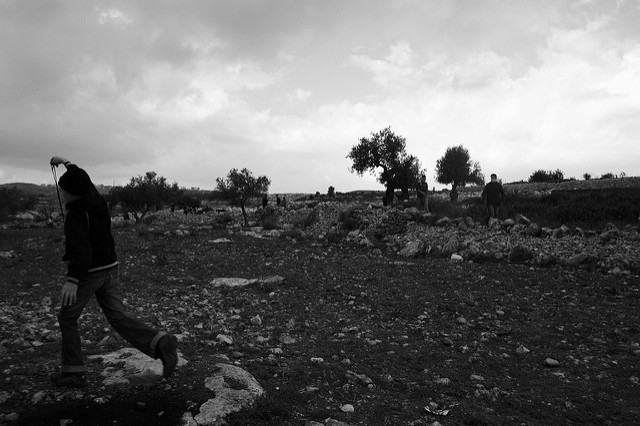 Often the saying is to leave the past behind you. But what are Palestinians to do when they are repeating being shoved out of their homeland? May 15th marked the 79th anniversary of Nakba, the destruction of Palestine and the uprooting of thousands of people from their homes. Although Palestinians still face similar struggles today, they are resilient. They are fighting for their home, and they are survivng to tell their story.

Against Erasure by Noor Hindi

In a powerful prose piece, Noor Hindi uses erasure a literary device and a metaphor to recount what happened to his grandmother and her family when they were forced out of their homes in Palestine.

These knee jerk series of photographs portrays Palestinian resistance to gas attacks by Israeli forces during the Great March of Return, where families are trying to go back to Gaza. Using their creativity, Palestinians are using anything and everything to stop the tear gas from affecting them.

The End of Exile by Solmaz Sharif

Solmaz Sharif’s new poem captures how life is rebuilt after death. Read more of Solmaz’s work on The Margins.

As the dead, so I come

to the city I am of.

To watch play out around me

audience as the dead are audience

Palestinian American Rights lawyer, Noura Erakat, bites the bullet and calls out religious supremacy in the war between Israel and Palestine in the past leading up to the present.

Had Jews merely wanted to live in Palestine, this would not have been a problem. In fact, Jews, Muslims and Christians had coexisted for centuries throughout the Middle East. But Zionists sought sovereignty over a land where other people lived. Their ambitions required not only the dispossession and removal of Palestinians in 1948 but also their forced exile, juridical erasure and denial that they ever existed.

Known in english as “the Catastrophe,” 1948 was the year in which hundreds upon hundreds of thousands of Palestinians were forcibly displaced from their homes by the hands of what is currently a colonial, ethnocratic apartheid state. Countless were slaughtered, raped, and wounded in the process, and the ensuing Palestinian diaspora & refugee crises were born. On this day each year, we, the children of the Palestinian diaspora, unite in our visceral and ancestral grief; our visceral and ancestral resilience.

Ashley Somwaru is an Indo-Caribbean woman who was born and raised in Queens, New York. She received an MFA in poetry from CUNY Queens College. Somwaru has published a chapbook with Ghostbird Press in 2021 titled Urgent \\ Where The Mind Goes \\ Scattered. Previous work has been published in Lammergeier, Newtown Literary, Solstice Magazine, SWWIM, VIDA Review, and elsewhere.

Keeping Tabs: A Critical Eye
This week's articles are about the current U.S. political climate–but don't worry, we have some new tunes for you to enjoy, too!