A collection of the six works of writing, translation, audio, and photography that nuzzle into different corners of this apparent insignificance

By Maureen S.Y. Tai and The Transpacific Literary Project 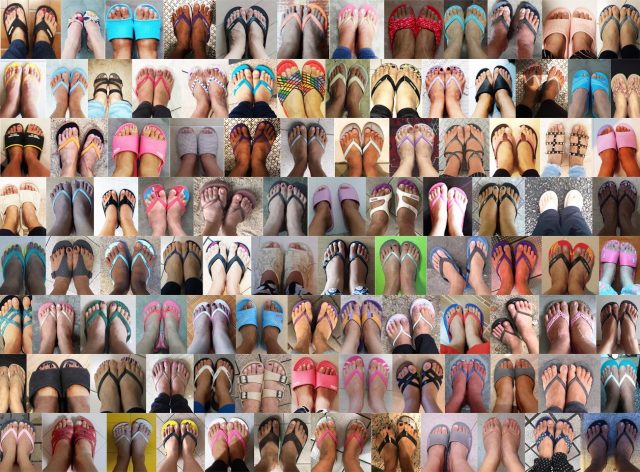 “We live everyday lives and do not feel the presence of a mundane object like the slipper. And yet, once deprived, its absence is glaringly unbearable.” —Hazel Chen 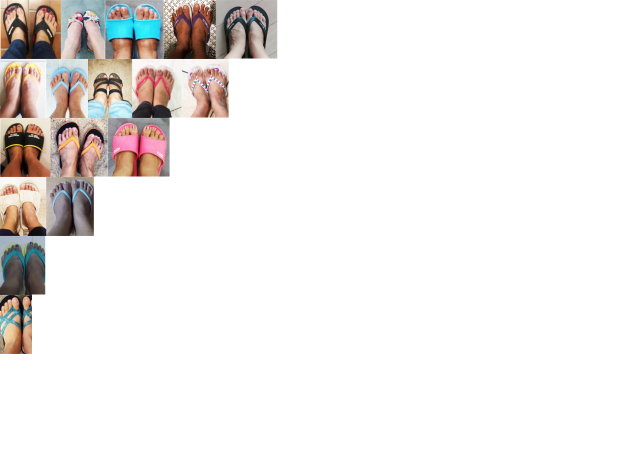 In the opening piece, 一隻人字拖 || A Flip-Flop by Hong Kong poet 陳抒 Hazel Chen, translated from the Cantonese by 吳鍄穎 Aaris Woo, the flip-flop presents as an object easily lost and yet not easily given up. With undertones of the political turmoil currently shaking Hong Kong, as well as the not so distant Umbrella Revolution, the poem situates the flip-flop as an object of transient beauty, one to be tirelessly fought for again and again. 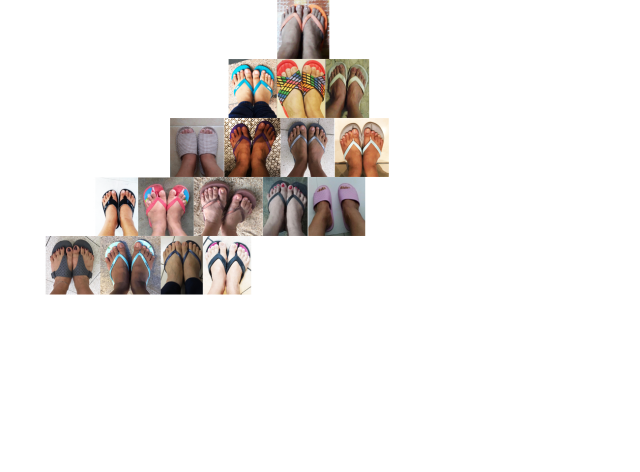 Shifting from the streets into a domestic space, Grandma Love by Ji Hyun Joo centers the object of the slipper as a vital lifeline to home and the pieces of one’s identity that can perhaps only be expressed while there. In this piece of short fiction, the protagonist’s grandmother protects a private bundle of slippers in her closet as her last remaining ties to her life in Korea and the self she left there, with the exposure of the slippers as an exposure of unspeakable vulnerability. 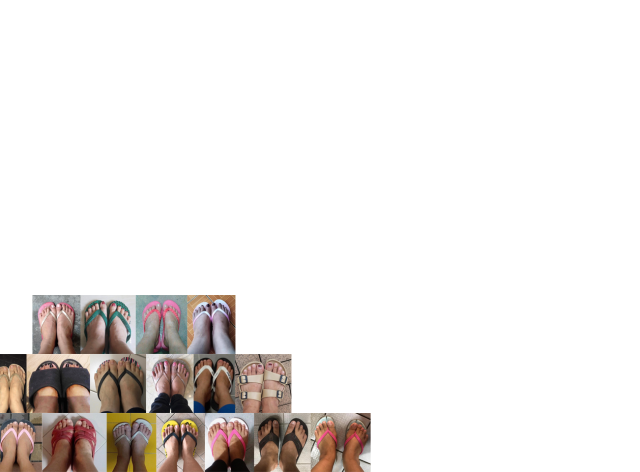 Emily Yang’s poem and voice recording 藍白拖 combine to bring out the aching intersection of political and personal work. The poem orbits around the Taiwanese 藍白拖, the blue-and-white sandals commonly worn in most traditional houses, and which, as the standard-issue shoes worn by prisoners in Taiwan, serve as a touchstone for the contemplation of willful and unwillful submission. In an audio reading of the poem, the poet’s voices hold that multiplicity of an object both stepped on and stepping through the world. 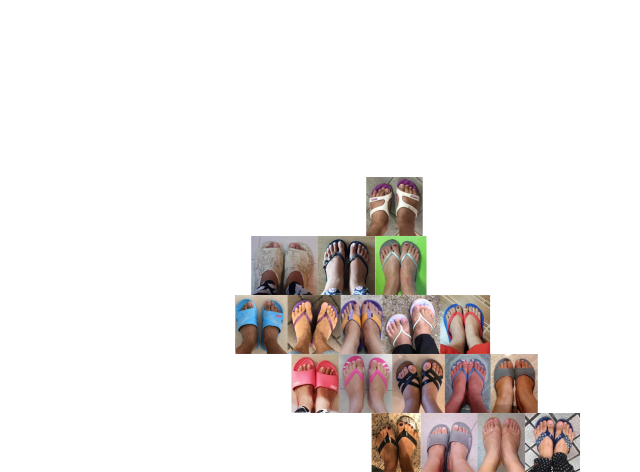 If Emily Yang’s poem “struggles the breath” as one reader says, then the new work of fiction from South Korean writer Wei Ye is nearly breathless. 통풍 || Ventilation posits the option of breathable footwear as unattainable freedom in modern Korean society. Self-translated by Wei Ye into English, the text can be said to lack air in both of the writer’s languages as a claustrophobic critique of rigid institutional spaces in which formal dress shoes and combat boots cause the feet to sweat, itch, bleed, and stink. 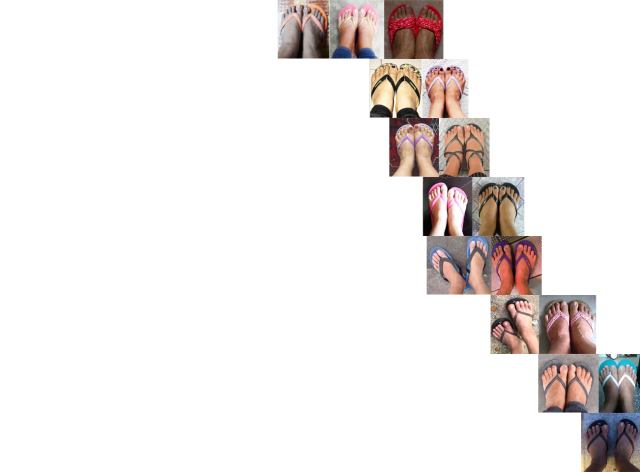 In a softer treatment of the feet, JinJin Xu’s poem Night People opens with listening to the gentle shuffling of a mother turning down the house and preparing for bed at the end of the day. Formally, the poem parallels the act of listening to a loved one’s footsteps in the dark, creating a silent space between desire and connection in which the imagination flickers. 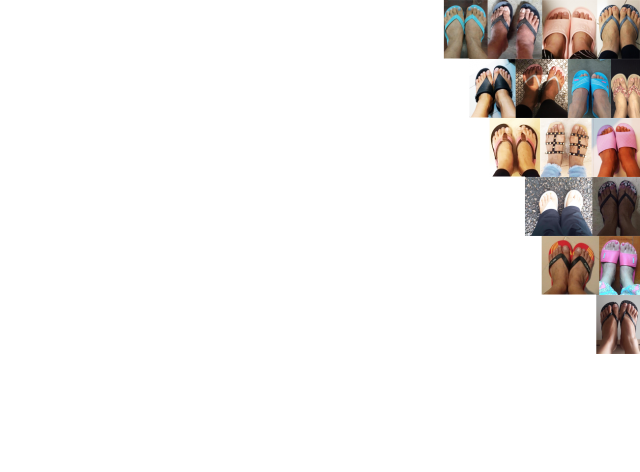 An essay, Sandal Jepit di Penjara || Sandal Jepit Swallows in Prison, by Indonesian journalist Ayu Prawitasari, translated from Bahasa Indonesia by Madina Chumaera, concludes the folio. Reflecting on the value of “sandal journalism”, the writer recalls a childhood experience of her father’s stolen sandals at a mosque during prayer and how this event shaped her politics and career of resisting the harsh treatment of the “sandal-jepit society” while exposing more of Indonesia’s white-collar crime and corruption.

Each piece of the Slipper folio is accompanied by one slice of a photo series by Malaysian writer and artist Maureen S.Y. Tai. Entitled “Unseen”, the series features the foot-selfies of 100 women living and working in Hong Kong as migrant domestic helpers. Noting how the humble and ubiquitous slipper seems to hold both the bodily and symbolic weight of Hong Kong’s migrant domestic workers—those who continue to lack visibility and self-representation despite their critical role in the city’s social and economic well-being—Maureen Tai sent out requests for slipper-selfies and personal anecdotes. Responses were rapid among the tight-knit community of domestic helpers, with 100 women sharing their slippered feet in just two weeks. Running throughout the stories shared via WhatsApp and Viber was a thread of selfless sacrifice for family, who might be rarely visited but are constantly supported by the working women.

We close the Slipper folio with a collective profile of some of the 100 women whose feet have self-presented here an object that is vital, visible, and multitudinous.

I wish to: See my Son a successful Geologist and my Daughter as a Nurse, Make a meaningful and comfortable life for my family; Go back home for good, Stay with my family, and put up a grocery store; Have a brighter future for my Nephew; Give my family a comfortable life; See my daughters successful in their careers; See my children successful in their lives; Put up a small business; Go back to study again, to follow my dreams of becoming a nurse; Go back to study again, Continue my ultimate dreams to be a Lawyer; Give my family a brighter future; Achieve their goal; Settle down in Canada with my children; Work in Canada as a Registered Nurse; Teach small children to love Mother Nature; Put up a Shelter for unfortunate kids as working in HK is just a temporary for me, I’m waiting for my Online boarding exam!; Be with my family and live a comfortable life; Be with my Family and start a groceries business and live with them in comfortable life – God bless us all; Stay for good in Philippines with my sons, my parents and to have a comfortable life; See my son a successful doctor; For my two sons to finish their studies and become a successful Engineer and Architect; See my son a successful engineer; Work in Canada as a teacher; Be back to school to finish my studies; See my daughter as a successful geologist; See my Daughter as a successful Dentist; A better and comfortable life; See my Siblings successful in their lives; Go back to School and to see my Brother a successful Marine Engineer; See my daughter as a successful nurse; See my Brother as a successful Engineer; Back to School, a successful Nurse; Continue my study, becoming a Nurse; To see My Daughter and Son a successful Nurse and Architect; See my Sisters successful Teachers; Go back home for good to be with my family and to have a small restaurant and grocery; See my son successful in his career and have a comfortable life; See my children finish their studies and have a peaceful and comfortable life; Get married, have children of my own; Work in Canada and get Married; Work in Canada, Get Married and Petition my parents; Stay home for good, run a small business; See my siblings finished their study; Make a comfortable life with small business; Be back to School, Work in the USA and get Married; Give a hand to the needy, especially orphans and give them a future; Be back to School, working in a hospital and get Married; Go back to School and to see my Brother successful; Travel around the world with my parents; Wooden house next to beach; Run a coffee shop with boutique; Get married, children of my own, house in the village; Be back to School, finished my Nursing course, work in the hospital; See my brother successful as an Engineer; See my daughter a successful Doctor and my step-sister as a Teacher; Go back to study to finished my HRM course, run a business of my own, like a coffee shop or catering; Have a Grocery store and Coffee shop; Not for myself but to My Country! Let there be Peace and a Prosperous and Abundant life for each and every Filipino!; Go home and be with our Family!; Go back to Indonesia and have a peaceful life; Make a business of my own; Get married, have children and a restaurant; Have a big house and rice field for my family; Buy a piece of land and rice field; Have a land of my own and a big house; Provide a good education for my children; See my children to finish their studies; Run a karaoke bar with live band; Have a big house rice field and grocery store; Make a restaurant business and a happy family; To take care of my family.

Maureen S.Y. Tai works in an NGO and is an aspiring writer for children. She spent most of her childhood and youth in Malaysia, and after graduating from high school, has lived and/or worked in Japan, Canada and England. Proudly Malaysian and currently resident in Hong Kong, Maureen speaks (and dreams) in five languages. She has two young children and together they write a book review blog. Her first creative work was published earlier this year by Cha: An Asian Literary Journal.

The Transpacific Literary Project is an ambitious online editorial initiative of the Asian American Writers’ Workshop (AAWW) that is poised to foster literary connections between East and Southeast Asia, the Pacific Islands, the Asian diaspora, and a broader American reading public. The project has taken the shape of a series of portfolios published on AAWW’s online magazine The Margins. These portfolios comprise poetry and prose written by East and Southeast Asian writers, with an emphasis on works in translation, curated around broad themes, and seek to traverse geographic and other boundaries.

Excerpt: Qiu Miaojin’s Notes of a Crocodile
Qiu Miaojin—one of the first openly lesbian writers in '90s post-martial-law Taiwan—committed suicide at the age of 26. What follows is an excerpt from her “survival manual” for a younger generation. With an introduction by translator Bonnie Huie. 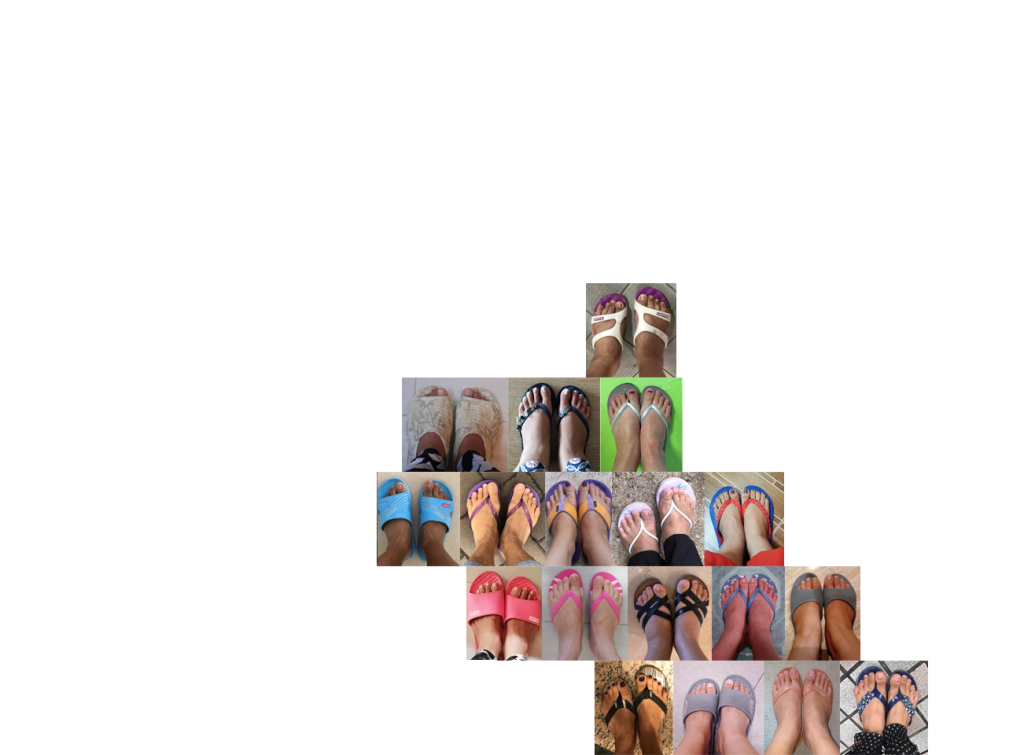